A summer Friday night at the movies 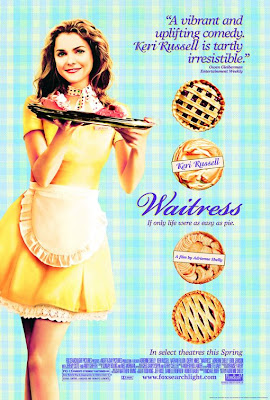 Last evening we went to see Waitress. I've been looking forward to this film since I first read about it. The movie stars Keri Russell, the woman who was in Felicity on television. She was very appealing as a young woman in a marriage with a man she doesn't love, pregnant by that man, and feeling stuck. These are the negatives in her life, but there are some positives; her co-workers who are also beloved friends and the old curmudgeonly owner of Joe's Pie Diner, where she is a waitress. Another terrific positive is pie! She makes up all kinds of different ones. This facet of the film reminded me of Chocolat and Like Water For Chocolate. Her late mother used to make pies and would sing her a lovely, lovely song. Her husband is played with his usual intensity by Jeremy Sisto. He's such a good actor. Joe is played by the wonderful Andy Griffith. What a great choice to have him. I love seeing older actors and actresses in movies. The movie corresponds with her pregnancy journey. We watch the changes in her as time goes by. I don't want to say much more so you can experience the movie for yourselves. I loved it, as did Tom, and the couple we went with. There is a poignant element to this film. The director, and actress who played one of Keri Russell's friends, Adrienne Shelly, was murdered last year. I read that the child was played by her daughter. And she co-wrote that beautiful pie song. What a sad loss for her little girl and husband.
Posted by Nan