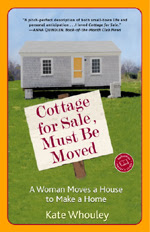 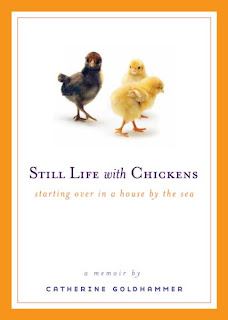 Recently, and most coincidentally, I've read two books about single women renovating cottages in Massachusetts. The first was Cottage for Sale, Must Be Moved by Kate Whouley; the second, Still Life with Chickens by Catherine Goldhammer.

They are, perhaps surprisingly, quite different books. The first one is written by a single woman who lives in a very small cottage on Cape Cod. She decides to buy and move an old tourist cottage to her land and attach it to her house, a very interesting and less expensive way of enlarging her living space. Her book is rich with all the people who help her along the way. She has a map of her land in the front, and as in great old mysteries, a cast of characters. They are listed under three categories: Movers and Makers, Planners and Town Officials, Friends and Neighbors.

Brian, Bobcat-driver and firefighter.
Tom McKean, Tuba player and head of the Health Department.
Harry, Musician, computer programmer, woodworker, carpenter - and one of the Bog Boys.

That list of "cast and crew" sets the tone for the whole book. It is warm, humorous, kindly. I loved every minute I spent within its pages. She tells the story of this addition right from the first reading of the classified ad. The book begins:

I am a compulsive reader of the classifieds. For this reason, I do not get the daily paper. But each week, the Pennysaver arrives in my mailbox, and I cannot resist the urge to read: Wedding Gown: Priscilla of Boston, Ivory Lace. Size 8, Never Worn; Paid $2500. Sacrifice $1200.

I move on to a new heading, "Buildings," with a single listing:

I imagine these cottages, all in a row.

If the reader has had any long-term work done on her house, the situations will be all too familiar. The waiting, the excitement, the getting to know the men who are in your house - in your life, day in and day out for many weeks or months. And when they leave, when the job is all finished, there is delight, and also, a bit of sadness for the loss of that constant company. I liked this woman, I liked her friends and the working men, and most importantly, I liked the way she cares for all of them. She's just the friend you'd like to have; thoughtful, generous, grateful, just plain nice.

I also like the house and its place on the land. She describes it before the coming of the cottage.

I live on Cape Cod in a three-room house that was built in 1950. It is a quintessential seacoast home: weathering cedar shakes, yellow shutters, summertime window boxes filled with lavender impatiens, a white picket fence out front. To reach the house, you travel a long dirt driveway and climb six brick steps, walk through the arbor and along the slate path that separates the shade and sun section of my perennial garden. Knock on the front door - there is no doorbell - or come around and rap on the glass panes of the kitchen door. I am more likely to hear you there.

This makes me want to do just that.

The house sits on a flat bit of land in a hilly landscape; the downslope from the south-facing patio leads to an ancient way, now a gravel drive for my neighbors to the rear. From the kitchen you can see past the drive to an overgrown cranberry bog, home to cardinals and catbirds, doves and quail, robins, purple finches, crows, jays, red-winged blackbirds, the itinerant warbler. Turtles occasionally climb up the hill from the wetland; I find them nosing around the myrtle or behind the house under the holly tree.

Along with the map, there are photographs, though not nearly enough for me. I wanted to see everything, and in color. These are nice black and whites, but I wanted to see the colors and more interiors. But I was happy to find more at her website.

As I looked back over the book to write this little "report," I realized that I already want to read it again. I simply loved it.

The second book, while looking a bit the same from the outside, is quite different. This woman is single through becoming recently divorced. While Kate Whouley has a cat, Catherine Goldhammer has a twelve-year-old daughter and a dog. She is moving because she can no longer afford the lifestyle in the upscale, median income in the six figures, neighborhood which is the only life her daughter has ever known. A columnist once described this town as a place where "the lawns are green and the hearts are cold."

I did not have a year in Provence or a villa under the Tuscan sun. I did not have a farm in Africa. Instead my diminished resources dictated a move to a run-down cottage in a honky-tonk town where live bait is sold from vending machines. But as luck would have it, in a town where houses rub elbows, I came to live at the edge of a pond beside a small forest. I came to a place where a thousand dragonflies the size of small birds fly over my yard in the summer. In a town where everyone knows everything, I came to live in a place no one knows exists.

This isn't a rich suburb, though it is only five minutes from their old house. It is a town "set upon a six-mile peninsula bordered on one side by Boston Harbor and on the other by the Atlantic Ocean."

Once the home of a large amusement park with a famous roller coaster, it had developed haphazardly, with recreation rather than posterity in mind. Big houses sat cheek and jowl with tiny ones, shoehorned together on tiny streets. Some of them were beautiful and some of them were decidedly not.

Six Mile Beach was a working-class town, a town with a twenty-four-hour Laundromat and a very busy police force.

For we had moved from a town with no crime to a town in which the police log in the weekly local paper was a hotbed of information. On big weeks - Six Mile had recently seen a large cocaine bust and a small wave of heroin-related deaths - the log ran three pages, but even on a normal week it ran two.

Some women might not want to move to such a place with a young daughter, but not only does she like it, she is not a bit condescending. She never felt at home in Hearts Are Cold, but both she and her daughter are decidedly happy in Six Mile. The six chickens she gets are, in the beginning a bribe to get her reluctant daughter to be more enthusiastic about moving, but they become an important part of the change that happens in leaving one life for another. In this book we don't get to know the workers as we do in the other, but we do meet her great women friends, the "Moon Women" who get together each month on the full moon and go to the beach with food.

This, too, is a wonderful book. Both are journeys of a sort; interior journeys symbolized by the outside work on a house. The Whouley book is subtitled, A Woman Moves a House to Make a Home. The Goldhammer book's subtitle is, starting over in a house by the sea.

I loved both books and I highly recommend them.
Posted by Nan