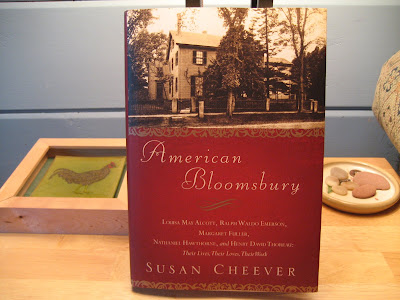 Reading American Bloomsbury felt very much like sitting in my kitchen with Susan Cheever, listening to her tell me stories of all these talented people in Massachusetts in the 1800s. I could "hear" her voice, and I occasionally wanted to respond or ask a question. It was a unique reading experience for me. She wrote about a group of people, rather than one person. There are many shortish chapters devoted to one author or personality, but others always creep in. The reader learns about an incident in Emerson's chapter, and gets a different slant on the same incident in Alcott's chapter. There isn't chronology as such, and surprisingly this didn't bother me. I could go to the back of the book, and look it up if I really needed to know the year, but mostly the narrative simply flowed around about these amazing people. They are presented, warts and all. No one is "perfect", and not a few are selfish or self-absorbed or poor husbands (or all three at once). But we also see their goodness, at least the good they tried to do, and quite often failed. Hawthorne living for years in his family home, writing away upstairs, hardly seeing anyone after the death of his father. Bronson Alcott, really the most irritating of them all. A terrible husband, father, provider, but still we see the idealist, the man who hates slavery, who can never get it just right when it comes to living a life. Thoreau who was so very ahead of his time that no one really understood him.

Each of them produced extraordinary works which are still revered today. Among these folks, there was genius after genius. Louisa May Alcott, Ralph Waldo Emerson, Margaret Fuller, Nathaniel Hawthorne, Herman Melville, Henry David Thoreau. And they all wanted to change the world as it was. They tore against the bonds of propriety, Puritanism, and slavery. Some promoted the abolition of slavery, some promoted women's rights, some promoted nature over societal mores. Some had money, some had no money. They were all different yet were all entangled with one another, some romantically, some intellectually, some philosophically.

The poet Henry Wadsworth Longfellow often dropped by the Emerson House from his house in nearby Sudbury for a cigar and some brandy, and Emerson, Longfellow, and Hawthorne and his friend Melville talked a lot about who would write the story of Evangeline - they decided that Longfellow was the one.

The book's energy comes from a fierce yearning, a longing to have had the fictional experience instead of the real one. Little Women, as many great books do, hovers in the gap between art and life- just alive enough so that we can recognize ourselves in its pages, just artistic enough so that we can find the lives we read about completely satisfying.

My feeling is this book will serve as an introduction to all these authors, and any reader who is interested will go on to read more about the individuals and/or to read their books. It was a very pleasant and enjoyable reading experience for me. I knew very, very little about the Alcotts, Hawthorne, and Fuller, and just a bit about Thoreau, so it was a book-lover's delight to read about their lives and their books. I definitely recommend it, even if you don't care for some of the authors.
Posted by Nan