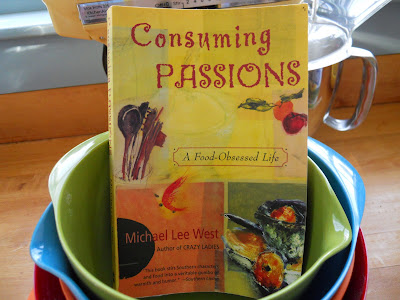 
2011 marks the fortieth year of our being vegetarians so the Foodie's Reading Challenge is a fun way for me to celebrate. Tom and I were brought up in the fifties and sixties in northern New England where pizza was an unknown, and all vegetables were boiled. My plate was neatly divided into thirds: baked potato, vegetable, and meat. Michael Lee West writes:


I grew up on blue-plate specials - known in café lingo as a meat, bread, and two sides.

I must have been a cradle vegetarian because my early food memories are of pretending to wipe my mouth with a paper napkin and spitting my meat into it. The only beans I ever heard of, and couldn't stand the taste of, were baked beans. There were no grains except bread and spaghetti. There was no culinary history in my family that I ever heard about. I know one of my Grammies made homemade white bread, but that's it. I have no recipes except a few from my mother and no memories of any special foods at extended family get-togethers. My mother also made homemade bread and she squeezed oranges for juice, two things I've continued.

But in 1971, I became a vegetarian and a foodie. The late sixties and early seventies were occasioned in the world by more than hippie life, drugs, anti-war protests, and music. There was also a veritable food explosion. Health food stores sprang up which sold grains and fresh vegetables. We were going to college in Boston, and had an apartment just down the street from The Organic Food Cellar, and the legendary Erewhon Trading Company. We were in food heaven. In the seventies, there were cookbooks to guide us along this new path like Tassajara and Laurel's Kitchen. Food was in. Food was cool. Food was trendy. Tom and I began eating things that we'd never heard of just a few years earlier - brown rice, hummus, tabouli, different ways of cooking potatoes - like potato loaf, and sautéing! Suddenly, I liked vegetables. I ate onions and garlic. My taste buds exploded, and Tom and I became full-fledged foodies.

And so, this Foodie's Reading Challenge is just the ticket. I began with Consuming Passions, which is a combination of family lore and recipes. Here is an example, par excellence, of what a 'foodie' really is. The author is describing her mother.


Along with most Southerners, Mama and I share a deep affection for food. This appears to be hereditary. Last spring my mama was critically ill, and she drifted in and out of consciousness. One time her hands flew out of the covers and bunched around her mouth. Her lips made little smacking noises. Thinking she was having a seizure, I cried, "Mama?"
"I was dreaming about eating cake," she said, cracking open one eye. "It wasn't homemade, but it was Baskin-Robbins chocolate chip with white icing."

This is a book crammed full of delightful writing and stories, including the quotes which begin the chapters. Here are some to whet your appetite (I know - bad pun!):

For a chapter called Sunday Dinners: A Memoir -


Every Sunday, the whole family gathered at Mama Hughes's house in Amite County, Mississippi. They were ferocious eaters and talkers, devouring rumors and innuendo with gusto. Food was their common language, and everyone understood the dialects.
-Aunt Tempe, reminiscing about family dinners, 1991


Potato salad is our friend. It will never let you down. It's a shame we have to eat it, but that's life.
-Mabel Wauford, spinster and home economics teacher, 1969

And my favorite, from The Cabbage Eating Ghost chapter -


All Southerners are the great-grandchildren of ghosts.
-William Faulkner

There's a chapter on seasoning cast iron which is a primer for anyone who has just bought a new pan. It begins with this quote:


All the mysteries of Southern cooking can be solved in an old black pot.
-Aunt Joyce Forbes, champion bourrée player and divine Cajun cook

Being a huge fan of cast iron pans, I found this chapter fascinating. I took a picture of my own 'black pots.' This is in natural light. 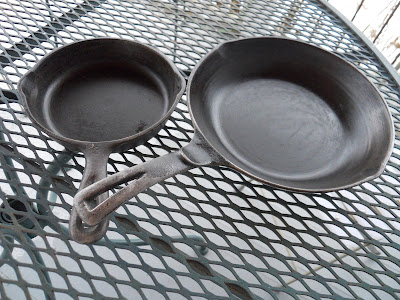 But look what happens when I brought them inside and used the flash. Here you see the real seasoning. 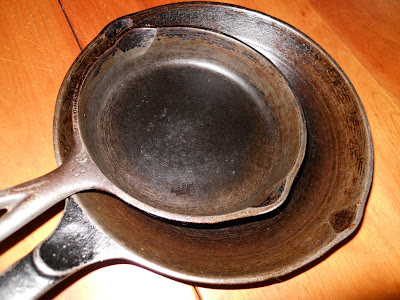 Toward the end of this chapter, Michael Lee West says,


One last recommendation - until your pan develops a smooth, nonstick finish, use it wisely. Everything will want to stick.

I cook everything in my pans, except for scrambled eggs. No matter how well-seasoned the pan, those eggs stick and make it a miserable job to try and clean it. So, scrambled eggs around here are always cooked in the stainless steel frypan which goes right into the dishwasher and cleans up just fine.

Margaret dropped by just as I was finishing the book to pick up some of that baklava, and since Consuming Passions was originally hers, and I knew she had read it several years back, I asked her how she had liked it. She said she loved it, and started talking about one particularly delightful chapter when they go searching for barbeque. This illustrates to me how wonderful a book is if a reader can remember details after having read it years ago.

Barbeque features prominently in the stories. 'The Quest for "Q" is an amazing tale from a 1962 adventure with her parents in the days before interstate highways. They traveled miles and miles on little more than tracks to finally come upon the barbecue pit. And the author tells us:


To this day, I slam on the brakes when I see a barbecue sign.

And then there is Uncle Bun's Barbecue.


The pit was located on Highway 51, better know as the Swamp Road. It was a dangerous highway, low and dippy, lined with ditches. One thing was certain - you didn't want to have car trouble on this road, because the ditches were full of snakes and Lord knew what else.

This particular story includes a tale that I think of as 'Southern gothic.' I don't believe it could happen anywhere else but in the South, or be written by anyone other than a Southerner.

Consuming Passions is a wonderful, wonderful book. I adored every word. I love her family and wish I were a part of it, which I could be for the time I was reading the book.

My friend, Les wasn't nearly as fond of the book as I was, and you may read her review for a differing view.

Although the book is often pretty 'meaty,' I did find a number of recipes I want to try. The one I made while reading the book is:

Preheat the oven to 450º F.
Butter (or spray with Pam) two 8x8x2-inch square pans.
Mix the flour, baking powder, baking soda, and salt.
Cut in the cold butter.
When the flour and butter mixture is crumbly, pour in the buttermilk.
Stir.
Turn the dough onto a floured board and pat down to a 1/2 inch thickness. A light touch is recommended - biscuits don't like a lot of handling. Using a biscuit cutter (or even the top of a child's jelly glass), cut out biscuits.
Heat the glass pans, then add the biscuits (they can touch each other - they like togetherness).
Bake 12-15 minutes or until brown.

MLW's notes: I never sift if I can help it, and have come to believe it is not necessary; but it can't hurt. In fact, it's bound to make your biscuits even better. 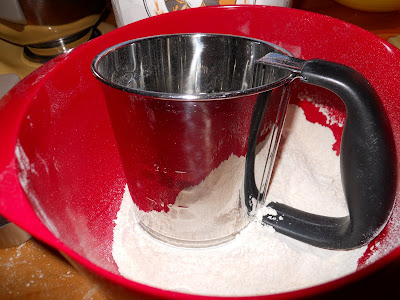 I didn't have two 8x8 pans or even one, so I used my glass 9x13 pan and it worked great. I made 14 muffins which disappeared in no time. 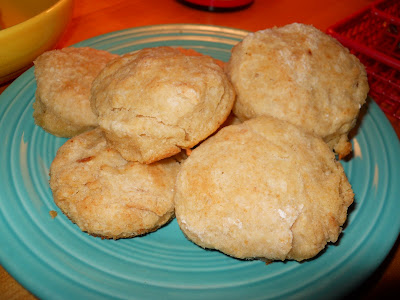 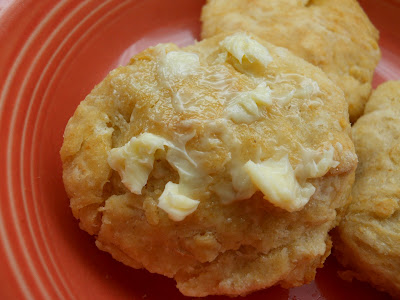 I shall finally end my rhapsodizing about this terrific book with words from a chapter called Funeral Food.


When you bring food to a neighbor or a friend, you are wisely letting the food fill in the gaps. Sometimes we say all the wrong things, but food knows all languages. It says, I know you are inconsolable. I know you are fragile right now. And I am so sorry for your loss. I am here if you need me. The bringing of food has no denomination and no race. It is concern and sympathy in a Pyrex bowl. In the kindest sort of way, it reminds us that life continues, that we must sustain and nourish it. Funeral cuisine may be an old custom, but it is the ultimate joining of community and food - it is humanity at its finest.

You may visit Michael Lee West's website and blog.
Posted by Nan