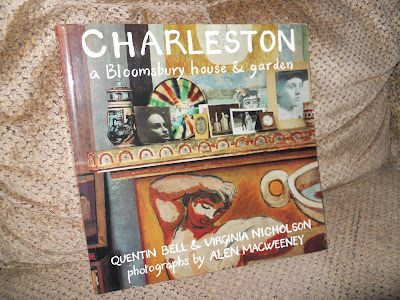 Ever since the first January of this blog, in 2007, I've done something a little special to honor Virginia Woolf in her birthday month.

This year I celebrated by visiting Charleston, the home of Virginia's sister, Vanessa Bell, and a large group of people who came and went, for longer or shorter periods of time. Quentin Bell was Vanessa Bell's son, and Virginia Nicholson, his daughter.

The book is really perfect. You know how so many adult 'picture books' are just that - a book you peruse rather than read. Well, this one has as much reading as photography, and they are exquisitely balanced. I would read a chapter at a time, first looking at the photographs and reading the explanations of them. Then I'd go back and read the whole chapter, looking again at the photos within the context of the story. The book explores the whole house and the garden, giving a chapter to each space: The Kitchen, Vanessa Bell's Bedroom, The Green Bathroom, on and on. Virginia doesn't play a large part in this book because she and Leonard lived not too far away so they didn't have to stay at Charleston. There is this picture of her in the garden. She's on the left. 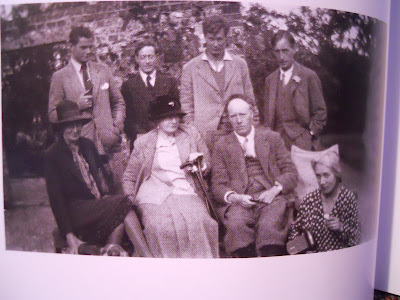 We hear so often of the care taken of her by others when she would have her dark times, but here is a Virginia I had not heard about. Vanessa's son Julian, Quentin's older brother, died in 1937 in the Spanish War. Quentin writes:


Vanessa was completely shattered.
We took her back to Charleston and for the rest of that summer Virginia devoted herself completely to her sister and gradually restored her to a quiet and very sad convalescence. On one of the few days when she could not come to Charleston, Virginia sent her sister a note. I found Vanessa quietly crying over it in the garden. 'Another love letter from Virginia,' she smiled very faintly.

In the preface, Virginia Nicholson tells us that her father was eighty-five when he started writing this book. He had put together a first draft by 1996, but was ill, and had to go into the hospital.


when I visited him there he was worrying about the second draft and asked me to help him with the work he had taken on. During his final weeks, when he could not write, I sat by his bed at home near Firle and we talked about his memories of the house where he had spent so much of his life. I placed a tape recorder on the bedside table. The day he died he was too weak and tired to talk much to me and I realized his last book would be left incomplete. Between them, my mother and the publishers encouraged me to take on the task of finishing it.

So this book is a composite, with our respective contributions indicated by our initials.

What a last gift to the world this is, and how wonderful that father and daughter got to share the work. This is the story that needed to be told - the story of a home that sheltered, encouraged, and inspired so very many artistic souls. We see their young selves and the work they produced, for Charleston is a work of art. It was decorated and painted, and is filled with lamps and tables and curtains and dishes that were created by those who lived there, and visited there. I don't believe there is anything like it. A really tremendous book. Please do visit the website for information and photographs.


Here is a picture of the co-author with her grandmother. 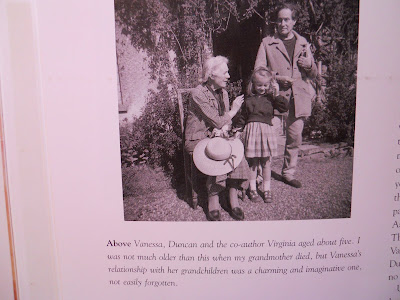