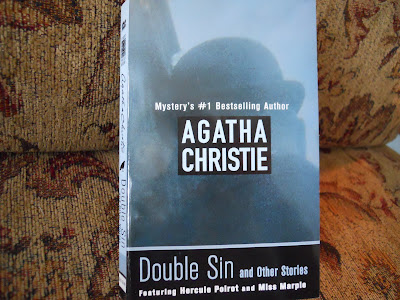 Today's Short Story is Wasps' Nest published in 1929, which comes from a little collection I recently bought. It may also be found in Poirot's Early Cases. I have sometimes seen the apostrophe between the p and the s, but it seems to me that it is the nest of more than one wasp!

I saw that Wasps' Nest was going to be on television, so I taped it and thought it would be fun to do a report on the short story and the hour-long television version.

Hercule Poirot surprises an old acquaintance, John Harrison with a sudden appearance in his garden. Poirot says,
"You said to me once: 'If you are ever in this part of the world, come and see me.' I take you at your word. I arrive."

Poirot explains that he has come to the neighborhood to investigate a crime which hasn't yet taken place.

"If one can investigate a murder before it has happened, surely that is very much better than afterward. One might even - a little idea - prevent it."

Harrison has a problem with a wasps' nest on his property, and has engaged a friend, Claude Langton to destroy it with 'petrol and the garden syringe.' Poirot questions the method because he was recently at the chemist's and saw that Langton had bought a poison, cyanide of potassium. Harrison says how very odd this is because Langton himself told him that he would 'never dream of using the stuff.'

When it is revealed that Langton used to be engaged to Harrison's fiancée, the reader begins to worry!

I finished this 16 page story, and exclaimed right out loud to Tom, 'a most excellent story!'

First of all, dear Hastings is in it, while he wasn't in the story. I love all Poirot tales, but I love them most when Hastings makes an appearance. The actor who portrays him, Hugh Fraser, 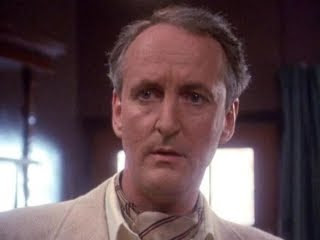 is a particularly appealing fellow, and he plays Hastings so beautifully. If you listen to any of the Poirot books on tape, you'll know that some are narrated by David Suchet, who plays Poirot 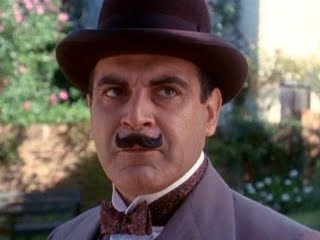 and others by Fraser. I can't help but think that dear Agatha would have loved the audio and the visual productions of her work. Brilliant, in the way that Hugh Laurie and Stephen Fry were brilliant in bringing Wooster and Jeeves to life on the television screen. Chief Inspector Japp played by Philip Jackson, 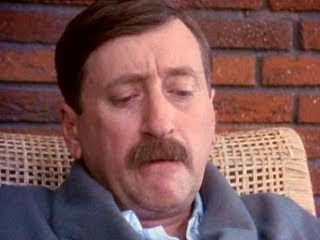 who wasn't in the story, is also in the production, though briefly, as is Miss Lemon played by Pauline Moran. 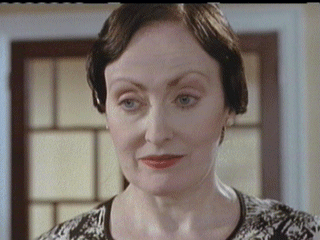 I suspect they are so appealing to readers that the scriptwriters decided to put them into as many shows as possible.

The story was basically the same, but it was fleshed out a bit to fill the hour time period. Hastings has gotten into photography which helps out in solving the case. Some of the dialogue was exactly as in the story which I found charming. As in all the television Poirot programs, the actors were superb, the period clothes wonderful, and the scenery and buildings divine.
Posted by Nan