Something Fresh by P.G. Wodehouse 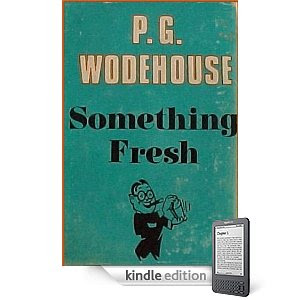 Though he is my favorite writer of all time, I've not written any book reports on Mr. Wodehouse's work since beginning this blog. I did mention him in a little author meme and noted some of his words here, as well as a few quotes du jour. I read one book in 2007 and three books in 2008 but this was before I began writing about each book I read. In the years previous to 2006, I listened to every P.G. Wodehouse book I could find which was narrated by the late David Case, who recorded as Frederick Davidson. I absolutely loved the way he told the stories. I also listened to a few that Alexander Spencer read. Though he is very good, and a favorite with some Wodehouse fans, Davidson will always be my personal favorite voice.

In Something Fresh, the first of the Blandings books - or as Wodehouse himself said, 'The Blandings Castle Saga' - we begin with a young man, Ashe Marson doing his morning exercises outside his apartment in London, and a young woman, Joan Valentine who laughs at him. When she comes to apologize they find out that not only are they both Americans by birth but that they also work for the same company. He writes the Gridley Quayle adventure detective stories and she writes for Home Gossip. Neither of them is happy in their jobs.

And then we meet one of the best characters in literature, Lord Emsworth, and his son, Freddie Threepwood.

Like many fathers in his rank of life, the Earl of Emsworth had suffered much through that problem which, with the exception of Lloyd-George, is practically the only fly in the British aristocratic amber - the problem of what to do with the younger sons.
It is useless to try to gloss over the fact - in the aristocratic families of Great Britain the younger son is not required.

But this fact is not the only reason that Freddie causes his father fits.

He had been expelled from Eton for breaking out at night and roaming the streets of Windsor in a false mustache. He had been sent down from Oxford for pouring ink from a second-story window on the junior dean of his college. He had spent two years at an expensive London crammer's and failed to pass into the army. He had also accumulated an almost record series of racing debts, besides as shady a gang of friends - for the most part vaguely connected with the turf [racecourse] - as any young man of his age ever contrived to collect.

Because of these offenses, his father has cut his allowance and forced him to live back home at Blandings Castle. Of course such a boulevardier as Freddie absolutely despises this sort of life, and so is thrilled when he and his father go up to the metropolis, London on business for a couple of days. Freddie immediately gets into trouble, while Lord Emsworth just longs to be back in the country.

London was always a trial to the Earl of Emsworth. His heart was in the country and the city held no fascinations for him.

as completely happy as only a fluffy-minded old man with excellent health and a large income can be. Other people worried about all sorts of things - strikes, wars, suffragettes, the diminishing birth rate, the growing materialism of the age, a score of similar subjects.
Worrying, indeed, seemed to be the twentieth-century specialty. Lord Emsworth never worried. Nature had equipped him with a mind so admirably constructed for withstanding the disagreeableness of life that if an unpleasant thought entered it, it passed out again a moment later. Except for a few of life's fundamental facts, such as that his check book was in the right-hand top drawer of his desk; that the Honorable Freddie Threepwood was a young idiot who required perpetual restraint; and that when in doubt about anything he had merely to apply to his secretary, Rupert Baxter - except for these basic things, he never remembered anything for more than a few minutes.

Freddie is newly engaged to Aline Peters, the daughter of a rich American who collects scarabs. Miss Peters is loved by George Emerson. Aline is an old friend of Joan Valentine (see above). This same Joan used to appear on the stage, and young silly Freddie fell in love with her from the audience seats. He wrote her love letters and poetry. This wouldn't be a problem except for the fact that he may have proposed marriage in one of the epistles, which could result in a breach-of-promise lawsuit.

Are you confused yet? Well, this is so very typical of a P.G. Wodehouse novel. Amazingly, as one reads along, it never seems that confusing. We blithely follow the characters on their hilarious adventures. The books are not farce or parody, neither of which I enjoy. They are merely stories in a parallel universe in which death and war and sadness simply do not exist. Evelyn Waugh wrote:

Mr. Wodehouse's idyllic world can never stale. He will continue to release future generations from captivity that may be more irksome than our own. He has made a world for us to live in and delight in.

There is no literary place I would rather be. Wodehouse writes in this book,

After all, what could be pleasanter than a little literature in the small hours?

And I would only add, written by Pelham Grenville Wodehouse. It is the purest form of escape ever written, but it is combined with excellent, excellent writing. The man was, I think, a genius.

Even as I write this book report, I cannot contain a laugh. Yes, not just a smile, but a real laugh as I think back on the book. It is entirely possible that I love this one most of all. The characters are sublime, especially the butler, Beach, and the secretary, The Efficient Baxter.

As well as sometimes outlandish humor, there are quiet little bits as well.

In English trains the tipping classes travel first; valets, lady's maids, footmen, nurses, and head stillroom maids, second; and housemaids, grooms, and minor and inferior stillroom maids, third. But for these social distinctions, the whole fabric of society would collapse and anarchy stalk naked through the land - as in the United States.

I shall end this with another great quote from Waugh:

The gardens of Blandings Castle are that original garden from which we are all exiled. All those who know them long to return.

Through the words of Pelham Grenville Wodehouse, we can all go back for renewal and courage to face the 'real' world.