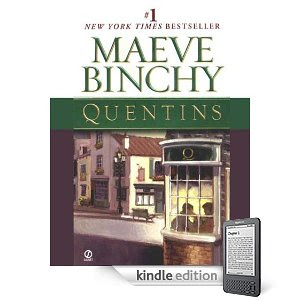 Quentins is a book that tells two stories which come together. One of the stories I love to pieces - the story of the restaurant in Dublin named Quentins. I so enjoyed reading about the owner, the managers, and the patrons. The other story which goes on much longer (or maybe only seems to) is about a woman, Ella Brady who has an affair with a married man. Women in this situation feature quite frequently in Binchy's tales, and they generally drive me crazy just as Ella did in this book. Tom Richardson is a financial consultant, a man full of charm who uses it to his best advantage. I found him a despicable character. So, with hating him, and feeling utter exasperation with Ella, parts of the book irritated me. But still, overall, I would say I liked the book because of the other part. Those twins I love so much in Scarlet Feather make some more shining appearances. How I'd love to really hear them sing 'Carrickfergus.' Others from that book also come back, as well as several from Evening Class. As someone says in Quentins, Dublin isn't a city, it's a village. Connections abound.

I found a few incidents annoying even in the part I enjoyed. Why have characters with nicknames of Pillowcase and Blouse? It just seemed stupid to me. And the idea that Quentins doesn't have an apostrophe because the sign painter didn't put it in, and it was okay with Quentin because he didn't care much for punctuation anyway was ridiculous to me. Again, why even include it? The book would have been just fine with the title of Quentin's. I fully realize these are silly criticisms but there you are.

However, the stories surrounding the restaurant are simply marvelous. Brenda Brennan, the manager had an illness once which left her deaf for a time. Because of this she learned to read lips, and that serves her very well in her job. She 'hears' what the customers are talking about and can solve problems and smooth things over because of this capability. She and her husband Patrick and his brother, the aforementioned 'Blouse' are wonderful, wonderful people. Maeve Binchy's books are full of kind characters who outnumber the shifty ones by far. I had a hard time sleeping the night after Ben died, and I will always thank Maeve Binchy and this book for diverting my mind and lifting my heart a bit.
Posted by Nan