One Special Summer by Jacqueline and Lee Bouvier 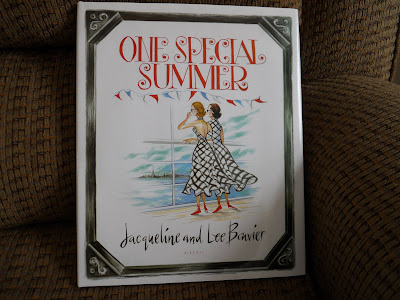 9. One Special Summer
written and illustrated by Jacqueline and Lee Bouvier
nonfiction, written in 1951; published in 1974; this edition reprinted, 2006
second book for the Dewey Decimal Challenge
finished, 1/24/11

One Special Summer was written by the young Bouvier women about their three-month trip to Europe in 1951. It was a gift for their mother. 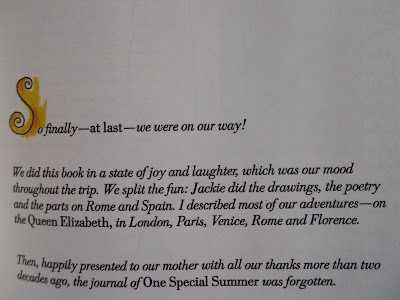 In 1974, when Lee Bouvier Radziwill was looking through letters and photographs for a book she was going to write, her mother


brought me this account of my first trip to Europe as one among several of her most precious possessions from us.
And so here it is, just as we did it in 1951, with not a word or a pen stroke changed.

This is what makes it such a meaningful and important book. It documents three months in the lives of two young women off on a huge adventure. Their experience is particular to them. Because they were writing it for their mother's eyes, they didn't censor themselves. The handwriting isn't perfect. There is poetry which they probably wouldn't have shown anyone else. Their observations are sometimes thoughtlessly sharp and critical, and perhaps inadvertently humorous; just as such observations tend to be when we are in our late teens and early twenties. On the ship going over:


This afternoon a fat old woman was seasick in the same bathroom I was in, and two of her front teeth were lost in the event. She wanted me to help her find them in the last disposal, but she had apparently flushed them down the toilet with her first deposit. That really made me feel on top of the world for the rest of the day.

They are young women with money at their disposal, and family connections to support them and offer social experiences. A Hillman Minx car awaited them upon arrival in England. 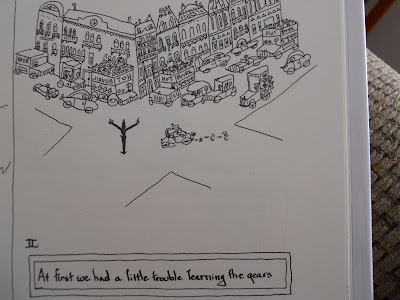 A letter home shows us that young people haven't changed all that much in these sixty years since. They put the best spin on everything, and offer many reassurances that everything is fine. 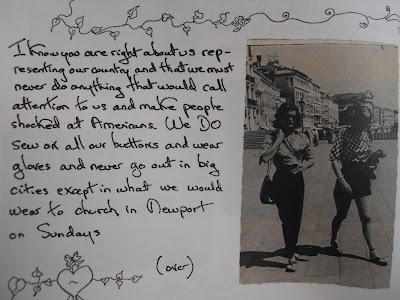 I first heard of One Special Summer from Heather. It is a book of pure delight combined with a sad foreknowledge of the future. We travel along with those fancy-free girls enjoying life away from home with the high spirits of youth. But we know the great tragedy and grief which is coming to the future Jacqueline Kennedy Onassis and Lee Radziwill Ross. It is also an historical document. It isn't something written now about the past; it really happened. We see a more carefree time when two girls could go off to Europe without much worry. They got to experience art and culture and music and have loads of fun doing it. I am so very thankful Lee Radziwill published it, and then republished this new edition. This is a book I'll come back to again and again.
Posted by Nan