Dreaming of the Bones by Deborah Crombie 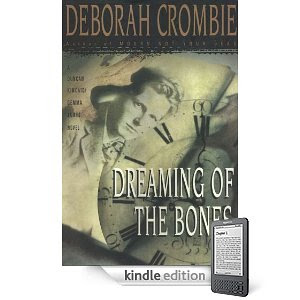 
If you've happened to read any of my four previous book reports on this series, you will know that I absolutely love it. And this book is on an even higher level. I would say that with Dreaming of the Bones, Deborah Crombie has joined the ranks of such writers as P.D. James and perhaps even Dorothy L. Sayers. This is an extraordinary book. It is far more than 'just' a mystery. It is an exploration of the human spirit's need for connection and community, the desire for intellectual society.

"Bloomsbury, the Neo-Pagans ... why do you suppose Lydia was so drawn to the idea of an intellectually compatible group?" ...
"Her background provides the obvious explanation. A fatherless only child growing up in a small village ... If she had any real friends she never spoke of them, so I suppose from the time she learned to read she longed for that sort of companionship."

The book has a dreamlike quality to it, as it goes back and forth between three different times with one woman connecting them all. Lydia Brooke was a student at Cambridge in the early 1960s, and killed herself thirty years later. In the present day, Victoria Potts Kincaid McClellan is writing a biography of Lydia who was quite a respected poet. She is a 'fellow at All Saints' and a Faculty teaching officer, specializing in twentieth-century poets' at Cambridge, and is able to get to know the young people, who are now older, with whom Lydia Brooke associated during her student years at Cambridge.

And Lydia Brooke herself had her own fascination with the past. As a student, she feels a strong affinity with Rupert Brooke and writes to her mother:

I feel a kinship with Rupert that goes beyond our common name. I share his passion for words and dedication to his craft - and I hope I have his discipline. How little things change. In 1907, Brooke and some of his friends at King's formed a society called The Carbonari just for the purpose of thinking and talking, a way of sorting out what they thought of the world. One night Brooke said, "There are only three things in the world. One is to read poetry, another is to write poetry, and the best of all is to live poetry." According to Edward Marsh (from whose biography I just quoted) Brooke said that at rare moments he had glimpses of what poetry really meant, how it solved all problems of conduct and settled all questions of values.

I adore such literary connections. In another letter home to her mother, Lydia writes,

I'll pretend I'm Virginia Woolf going to visit Rupert Brooke. We'll have tea in the garden at the Old Vicarage and discuss important things: poetry and philosophy and life.

If you want to learn more about Rupert Brooke - the man and his work, as I did from reading Dreaming of the Bones, there are some good sites here and here and here.

The book begins with Duncan Kincaid getting a call from Victoria, who happens to be his ex-wife. She has been remarried for some years and has a young son, Kit. Her husband has run off with the latest in a string of young women, and 'Vic' becomes aware that she doesn't miss him, and that her son may be better off because his father was so critical of him. She gets in touch with Duncan in his official capacity. She is concerned that Lydia may not have killed herself. She thinks there is a possibility Lydia was murdered five years ago. The investigating officer was about to retire and just maybe didn't put his strongest efforts into the investigation. She had attempted suicide a couple times before so that it wasn't unexpected when she finally (presumably) succeeded.

As Duncan and Gemma meet with Vic, they see the discrepancies but don't know how they can proceed without any hard facts. And then, about a third way into the book, a sudden death occurs. At first it is thought that the causes were natural, but then it is discovered that the person was murdered. Does this death relate to Lydia's? Will there be a way to find out if Lydia was really murdered?

The story is multi-layered and riveting. There is a slow, quiet buildup in Crombie's books that captures the reader. Her use of detail brings me right into the room, the garden, the very air she is describing. And after the slow, methodical buildup, the horses run away with the carriage. The end was so intense that I couldn't stop reading. Everything came together. All the little hints and nuances made perfect sense. As in each of the four books preceding this one, there is change in the main characters' lives. This book offers quite a huge development and it remains to be seen what effect it will have on Kincaid and James. This is an excellent, excellent mystery, and psychological study as well.

If you type Deborah Crombie into my search bar, all the book reports will come up and you can determine if these books are for you.

I had hoped to build a whole Deborah Crombie library on the Kindle, but not all her books are available. I wonder how that is decided, and why each book in a series wouldn't be there. It looks like the next one isn't so I'll either buy a copy or borrow it from the library.

I shall leave you with a poem by Rupert Brooke to break the reader's heart.

The Soldier
by Rupert Brooke 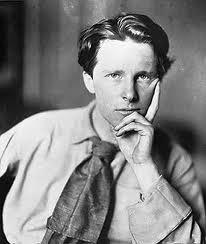 If I should die, think only this of me:
That there's some corner of a foreign field
That is for ever England. There shall be
In that rich earth a richer dust concealed;
A dust whom England bore, shaped, made aware,
Gave, once, her flowers to love, her ways to roam,
A body of England's, breathing English air,
Washed by the rivers, blest by suns of home.

And think, this heart, all evil shed away,
A pulse in the eternal mind, no less
Gives somewhere back the thoughts by England given;
Her sights and sounds; dreams happy as her day;
And laughter, learnt of friends; and gentleness,
In hearts at peace, under an English heaven.
Posted by Nan