The Ingram Interview by K.B. Dixon 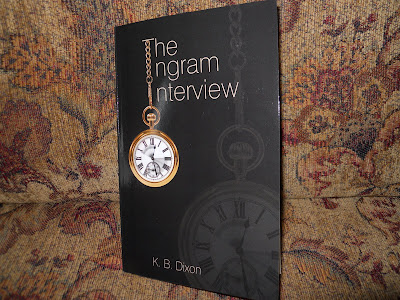 
I recently got an email from the author of The Ingram Interview asking if I'd like a copy. His emails said it was,

A short and unrepentantly quirky thing.

It is a distinctly unconventional book; I never know what anyone is going to make of it.

Rather liking the adjectives 'quirky' and 'unconventional' I wrote back and said yes, please, and I'm so very glad I did.

The book is set up as an interview with Daniel Ingram, retired English professor who is 62 years old. He has gone into an assisted living facility after an unexplained fall - an apparent heart attack, but they don't know for sure. There is bold type for questions and regular type for answers. Sometimes the interviewer makes a statement like, 'You look tired' and then Daniel responds. I think this is quite an ingenious way to learn about the character.

Being a huge fan of Hayley Mills when I was a girl, I loved that his boyhood bedroom had 'two dozen pictures' of her on the wall. That little piece of information told me a lot about Daniel, and made me like him very early in the book. She isn't the actress many young boys would have admired in those days. She wasn't glamorous or exotic. She was perky and spunky and adorable.

We see his dry, quiet humor and his love of reading in an 'answer' such as this:

[A man] was wondering why everybody he knows has so many books. I told him it was because he knew so many of the right sort of people.

Sometimes we see him as wistful about the world changing and passing him by.

You stayed up late reading.
I did. I reread one of my old favorites last night - a novel once described in passing as "a genre unto itself." It saddens me to realize how alone I am these days in my admiration for this sort of thing.

Of course I wondered what book he was referring to! The first one that came to mind was A Confederacy of Dunces by John Kennedy Toole.

In the kindest possible terms, Mr. Ingram has been asked to leave the facility, Fairview Court. He just doesn't fit in with the philosophy of the place. He isn't cheery. He doesn't want to join in activities.

I am an intransigent, moody, analytical loner.

He is going to live temporarily with an old student of his, and his girlfriend. Michael is now a filmmaker and a fair part of the book is about his latest movie, Will There Be Ducks?

There are a whole lot of names in the book, which may give some readers trouble. Yet, I thought it worked. There is a stream-of-consciousness quality to The Ingram Interview which makes the mention of many people quite natural. When we think, or in this case if we are asked questions, we may make note of many people; some just acquaintances, and others who play a more important part in our lives. Someone might ask you about a table, say, and then you are off on the story of who gave it to you or a scene from forty years ago sitting around that table.

Daniel is a bit of a fuddy-duddy, and knows it. The interviewer asks if he is hungry:

Very. I haven't said anything because I didn't want to start right off playing into the stereotype of early-eating old guy.

The interviewer says, 'You look annoyed.'

The wind today ruined my last good umbrella - the black, telescoping one with the hooked handle. I can't replace it because for some reason the people who used to make it have stopped making it, and so far as I can tell, nobody else has started. I am going to have to move to a different style, one with a straight, knob-like handle. I can tell you right now that I am never going to like it as much.

One may think it is simply because he is older, but in my experience people who are like this showed the beginning signs of it back when they were twenty-five!

I was so touched by this passage. I just ached for him. I felt such a tenderness toward the man. He reminded me a little of those dear fellows in Men Of A Certain Age on television. Do you watch it? I think it is the best, best show. In a small way he also made me think of Liam Pennywell in Noah's Compass by Anne Tyler. The two are much the same age and they also live in their own worlds a bit, keeping a distance from people.

The book abounds with bookish references which delighted me. Daniel talks about having a book with you at all times, working briefly in a bookstore, and mentions such diverse writers as Thomas Carlyle and Robert Benchley.

Another example of Daniel's particular sense of humor appears when he has to have his photograph taken for his old school's alumni magazine. He describes the photographer.

He is a veteran of the fashion scene. He has long, gray hair - like a lion's mane - which he combs back and goops in place so that it looks as if he has been caught, stop-action, staring into a gale-force wind. He has a signature style that trades heavily on the inherent drama of the black-and-white photo. He wants to make me look if not famous, at least significant - like someone from an earlier, more serious time. He posed me just off to the left of an ornately framed window, my chin up, my focus on posterity.
I don't like the finished product at all. I look grave and unhappy - like someone channeling Sartre or waiting in line at the post office.

I laughed right out at this, and could see both the photographer and the finished picture just perfectly.

The book has a couple 'appendices' in which we meet Daniel's son, and get to read the stories on which Michael's movies are based, but the 'interview' part of the book ends with a passage I found very moving, very real.

The is a man named Haskell who wrote a terrific short story about Glenn Gould, the neurotic Canadian virtuoso... He mentioned a line from Shakespeare's The Tempest - a line Gould would have known. Prospero is talking about death. He says, "Every third thought shall be my grave." Haskell says that that was the way it was with Gould - Book. Beer. Death. Lamp. Coat. Death, etc. etc. etc. For a while after the "apparent" heart attack, "death and dying" was my every third thought, too. But I'm improving. It became my every fourth thought, then my every fifth, then my every sixth. Now it is something like my every twenty-fifth. (I guess you would say it went something like this: light, water, radio, lather, razor, teeth, vitamins, socks, shoes, curtains, newspaper, mug, coffee, bowl, cereal, milk, spoon, dishwasher, keys, wallet, glasses, cash, door, car, death.) I will be back on dry land, so to speak, when it gets to being my every one-hundredth. I want to stay aware enough to fully appreciate what I have, but not so aware as to spoil it. Proportion is a tricky thing.

You may read more about the author at his website.
Posted by Nan