In a Summer Season by Elizabeth Taylor 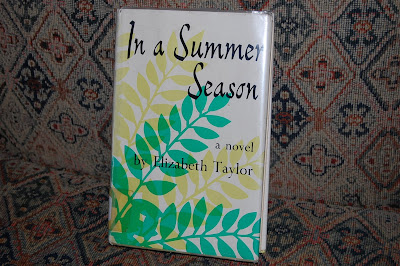 I enjoyed the time I spent reading In a Summer Season until the last few pages. What a disappointing ending. Quick, dramatic, way too tidy, and unworthy of the story in the rest of the book. But that's just me. Maybe other people found it a perfect way to clear up certain situations. Indeed, the flap on the inside cover says,

... builds to a shattering climax and a totally right resolution

Glad I didn't read that first. I may have skipped the whole book and missed some really nice'domestic scene' writing. It is my first Elizabeth Taylor and I plan to read more, including Mrs Palfrey at the Claremont, but if this happens again I will give up on the author.

We meet Kate whose beloved husband has died a while back. She is now married to a man ten years younger, who is the same amount of years older than her son. She also has a teenage daughter. An older maiden aunt lives with the family. So, we have several stages of life all under the same roof. Taylor does a good job of delineating between what people feel in the various decades. Kate and her husband Dermot seem quite in love to the reader, but there are portents of trouble. He can't seem to hold a job and is dependent on either his mother or his wife. Dermot, and Kate's son, Tom enjoy drinking and gambling together; more companions than stepfather and stepson. Louisa, the young daughter is infatuated with the local curate, who is thinking of leaving and becoming a Roman Catholic. The aunt Ethel is the observer who lets the reader know her opinions through conversations with, and letters to, her friend. The book follows each of these characters as they go about their lives one summertime. An old friend and his daughter come back to the area, bringing some emotional turmoil to various family members.

When I write it out like this it sounds rather dull, but it wasn't. The characters were well-drawn and I was interested in them. Yet, I was happier reading the book than when I thought about it afterward. Has that ever happened to you? I don't think it was just the ending that made me feel this way, but since closing the book, I found myself just as glad to be out of the company of these folks.

The book, published in 1961, offered foreshadowings of the times to come: a girl who is a model is very thin, yet is ravenous and eats all the time -probably bulemic; and there is talk of a view being spoiled by the building of houses.

I know there are some big Elizabeth Taylor fans out there, but I'm not sure I am one of them. As I said, I'll try Mrs Palfrey and maybe another one and see.
More reviews here and here.
And a review of a biography of Elizabeth Taylor here.
Posted by Nan