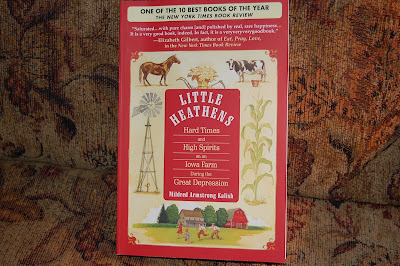 This book has been on the edge of my consciousness for a while now. I'd see it on the library shelf or on the internet, but I was put off by the title. Actually, I still am. As far as I can recollect, it was just used once or twice in the book. I believe it is a grandmother who used to call the kids by this epithet. I don't know. Maybe it's an old-fashioned way of saying, you little devils, which I don't like either. I'm always uncomfortable when a parent calls their children anything disparaging, particularly in the hearing of those children. Parents may think they are being cute, but names stay in a child's head, as this one must have in the author's.

Other than my own particular problem with the title, I loved everything about this book. I listened to a tremendous reading by Ruth Ann Phimister, who also narrates the Dearest Dorothy books. She is a young woman with the voice of an old one, much like Bailey White. It felt to me as if the author, who is in her eighties now, was telling me stories of her growing up years in Iowa during the Depression. And the stories she told! What I loved the most were the details of everyday life. She tells us about washdays, and cooking (with great recipes!), and haying. Her yearly life was split between living on the farm in the country with her mother during the warmer months, and living in town with her mother and her father's parents for the winter months so she could get to school. I recall my mother talking about living in town and working during part of the school year, probably for the same reason. Actually, I felt that other than locale, this story was much like the life my grammy and grampy lived on their farm, bringing up ten children, whose births spanned almost 25 years! Can you imagine? My aunt Susie, whom I've mentioned here a couple times, said no thank you to marriage and children. As the oldest girl, she had taken care of enough babies to last her a lifetime.

This split between mother and grandparents was more than geographical. Kalish' mother was quite a free spirit. There wasn't a particular order to their days; they ate when and where and what they wanted.

Mama almost never made an attempt to serve a balanced meal. If she had just taken bread from the oven around the middle of the day, our noon meal would consist of freshly made bread, homemade butter, whole plum jam, and a huge pitcher of milk. If, in the garden, she noticed that the sweet corn was ready, we had nothing but buttered sweet corn for supper.

Sounds perfect to me! And in fact, we eat much the same way ourselves.

Home with the grandparents was almost completely opposite. The grandfather, who got up first in the morning, decided what breakfast would be. If he wanted oatmeal, they'd all eat oatmeal. They all had to go to bed at the same time.

The book should be kept in some library's archives as a detailed description of how things were done in those days: how to cook on a woodstove, home remedies, harvesting nuts.

The author is cheery and her story is uplifting and fun, even with all the troubles of those days. Kids were a real part of the family work. They contributed and knew they were important to the running of the farm. I think this is something that all children want - to know they are important and necessary in the life of a family. There are lessons galore in the book, but they aren't expressed in a didactic or preachy manner. Mildred just tells her story, and we listen as children at her feet, learning without being aware we are doing so. This is such an important book for all ages. Those who lived through these days will enjoy reminiscing and those who can't imagine such a life will learn how it was lived. I loved it, and bought three copies as gifts. One was for Tom's birthday because he was so interested when I kept telling him things. I know he'll love it, too.
Posted by Nan