If God had a face, what would it look like?
And would you want to see
If seeing meant that you would have to believe
In things like heaven and in Jesus and the saints
And all the prophets and...

These are big questions. And unanswerable unless perhaps we do see the face or hear the voice, as Joan Girardi does in Joan of Arcadia. She is a teenager whose family has moved to Arcadia, Maryland where her father is the new chief of police. Her older brother's legs are paralyzed from a car accident, and her younger brother is a science genius. She's a girl with adjustments to make; to a new school and to a family changed forever by the accident. She doesn't shine in any particular area - she's an average girl in every way. Except one: she sees God, in the guise of many people; sometimes a boy of Joan's own age, sometimes a little girl, sometimes an older woman. They are walking amongst the people in Joan's world. They are students and repairmen and cupcake sellers. Sometimes we the viewers expect them, and other times we are as surprised as Joan. 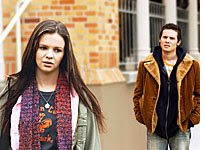 However God appears, there is a message and a mission. Get a job, pass a test with an A, ask a troubled boy to a dance. She doesn't understand but she does her very best to do what is asked of her. As an episode goes on, we see the why. In one of the most riveting shows we've seen so far, there isn't a great outcome - rather what she accomplishes is the lesser of two evils. God explains what would have happened had Joan not acted as she did.

This is a deep show. It makes us think and talk about what we've seen. The writing is superb. The show is not unrelated episodes; something that happened a while back may not be solved until much later. People from past shows come back in others. The characters seem real to us. Joan's family really tries in the face of problems. We see that love and caring make a difference in the world even when bad things happen.

Tom and I love this show. We'd never heard of it, but a while ago I read about some song that was played on Joan of Arcadia. I wondered what it was, looked it up on Netflix, tried one disc, and off we went on a great television adventure. As with too many really good tv shows, it was canceled after two seasons, but we still have a ways to go, and this thought provoking program will stay with us for a long time.
Posted by Nan