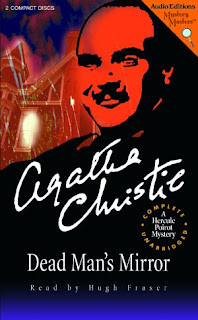 Though originally part of a short story collection, Dead Man's Mirror stands on its own perfectly well, as a brief (only two cds) but quite complete little mystery. As with all the Agatha Christie books I've read so far, there is a great deal of psychological analysis. Mr. Gervase Chevenix-Gore, a man who has 'egomania' writes a note to Hercule telling him he believes there is a fraud going on but he doesn't want to notify the police. He wants Hercule to come to his home as soon as he gets a telegram. At first Poirot doesn't want to be at the beck and call of this man but finds himself intrigued all the same, and when the telegram arrives, Hercule is off on the train. He arrives at the house to the surprised gazes of everyone present. No one is expecting him. There is quite a crowd waiting for dinner to begin. We learn that the man of the house hasn't shown up for dinner yet. In a normal household, it wouldn't be a big deal, but this fellow is a stickler for being on time for this meal. He hasn't been late in twenty years. If a guest ever does come late, he is never invited again. Thus, the company begins to wonder. It is said that he was last seen in his study. The door is locked, and must be broken down. They find the man, dead from an apparently self-inflicted gunshot wound. And so begins what is known as a 'locked room' mystery. There is no way anyone could have gotten in or out, so the man must have killed himself. Why would a man who was so full of life, and full of himself, commit suicide? This is the big question. But if he didn't, how on earth could anyone else have done it? Hercule Poirot joins forces with the local policeman, and together they interview each person in the house, and by using his 'little grey cells' he again solves a most mysterious mystery.

This was yet another excellent mystery, perfectly read by Hugh Fraser, who, as I have noted before, plays Hastings in the televised versions. I've really been in Christie heaven these past months, listening to the stories, and also watching the excellent television productions. I'm thrilled there are still so many ahead for me to read.
Posted by Nan