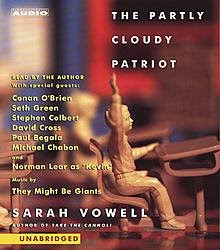 The Partly Cloudy Patriot
by Sarah Vowell
unabridged audio, read by the author and various others
nonfiction, 2002
finished, 12/4/08

It has happened again! I listened to all five cds of The Partly Cloudy Patriot by Sarah Vowell during the hours I should have been sleeping. I suspect I'm not unlike a lot of previously shy people, often only children, who find friends in books; some fictional, and a great many nonfictional, i.e. real. Some of those real ones are very sadly dead. Yet people such as Theodore Roosevelt, John Adams, Virginia Woolf, P.G. Wodehouse still are my friends. Their books, or books about them sustain me, buoy me, show me I am not alone in my (probably) geeky passions. Recently I found a new, living bookish friend in Nora Ephron. December third into the fourth introduced me to another new writer I had somehow missed. I came to Sarah Vowell's book as a complete stranger, and I finished feeling she was another literary friend. I nodded in understanding, I laughed, I chuckled, and I reveled in the way she put words together. I kept thinking, what a writer, what a good, good writer.

I love it that she loves history. I love thinking of her teen self immersed in the dark German cinema, and how in her twenties she learned to have fun. When she talks of being at National Parks among older people, and reading the same sort of book as a middle-aged man on a plane, I feel like she's talking about me. I've always, always been an old soul. Tom says quite frequently that I was an unusual child, but you know how it is - your reality is the reality in those years. I figured everybody was like me. I'm perfectly happy keeping myself to myself (that great English phrase). I like reading and thinking. I don't mind being alone, and actually prefer it. When Sarah Vowell writes, "I am two parts loner and one part joiner," she pretty much sums me up. I need periods of restful quiet as one needs air. I remember a girl in college who simply could not be alone. I never understood her. I feel like I'm most myself, my real self, when no one is around. Anyhow, I digress. What I am trying to say is that I just loved this woman. She is so smart, so truly funny, so warm. She expressed many, many thoughts that I walk around with in my head. And she also taught me a great deal: about the several Presidential libraries she visited (and her advice to President Clinton about his); about the Civil War and President Lincoln; about several areas of the country; about old maps (who knew that at one time California was an island on a map?!). I tend to be much more of a literature and history enthusiast than a present-day politics buff. I get by on as little information as possible. The last Secretary of State I was really sure of was Dean Rusk. Sarah Vowell follows politics and really knows what's going on. I learned a lot from her in this book.

I've bought two copies of The Partly Cloudy Patriot for Christmas presents. I'm on a cd list for her newest about John Winthrop and the Pilgrims, The Wordy Shipmates; and I've bought Assassination Vacation for myself. I just found out she is the voice of Violet in the only animated film I love, The Incredibles from a you tube video where she just sits and talks to us from her home. I won't put the whole thing on the blog because it is about ten minutes long, but you may find it here.
Posted by Nan