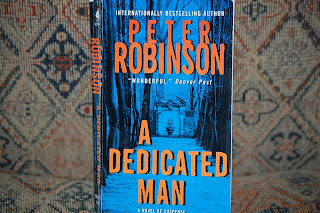 For a reason I can't quite understand, I have trouble writing about mysteries. Maybe because I don't want to spoil the plot? I don't really think so, since I'm quite careful about that. Perhaps I should just write the basics, and leave the review at that. I'm going to give it a try, even if I'm not successful because I just adore Peter Robinson's mysteries. For the life of me I can't understand why BBC or PBS has never made them into series like Frost or Dalgliesh or Maigret. I love those productions, as I do Blue Murder and George Gently.

Anyhow, back to Inspector Banks. He is such a good character - a regular fellow who can't stop smoking (at least in the early mysteries) and drinks too much on occasion, and is smitten by women other than his wife. But he is so much more. He's thoughtful and kind and caring. He notices the beauty of the Yorkshire Dales he has chosen for his home. He really thinks things through, and we the readers benefit from this because we puzzle alongside him, wondering what the heck is going on. In A Dedicated Man, second in the series, he knows that if he could have figured out the case earlier, a life would have been saved. The story is that a man is found dead, and he isn't one of those characters in a mystery that everyone hated. He was liked, accepted, and no one can figure out why he would be murdered. Of course as the book goes on, we learn more about the people in his circle of friends, and at the end, come upon the murderer.

There's an interview with the author which I just loved here.
Posted by Nan