When I wrote about my mother, I mentioned that she was an advocate for long-haired hippies. It was one of her finest traits, that she never judged people by how they looked or what they wore or what they did for work. In the late 1960s, there was a lot of criticism from older people toward young men with long hair. When someone would say something to her about the subject, she always defended it, and always said, look at Tom; he has long hair and he's a wonderful person.

I've tried very hard to live up to this legacy of acceptance. Much of it comes naturally to me, but it still took some getting used to when my eighteen year old daughter got her first tattoo. I think as parents it isn't easy to see our baby's beautiful skin with a permanent dye. In this generation of young people, it isn't hair styles but piercings and tattoos. And even some of us who had long hair forty years ago, have a hard time with tattoos because they are permanent. Hair can be cut or changed, but tattoos can't be removed so easily. In the past, tattoos were pretty much a military thing - if you saw a guy with one, you could be pretty sure he had been in the service. Or a biker, of course.

It is difficult for some people to understand the desire to endure pain for a permanent design on one's body. All of the young people I know don't seem to mind it so much. They feel it is worth it for the result, a work of meaningful art. I sort of see them as bumper stickers for the skin. They express something about the person. If I could bear needles, I'd have a small international vegetarian symbol. The joke in my family is that if I'm under general anesthesia, they should haul the tattoo artist into the operating room. :<) Each one of my children's tattoos has special significance for him or her. My daughter's first one was her Korean name. 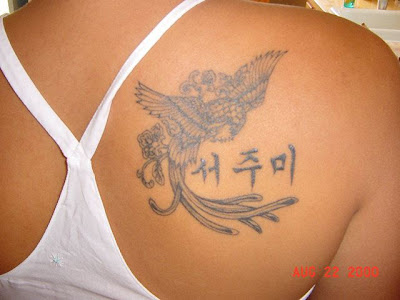 You should have seen all the legwork I did on the computer to be sure it was just right! Her second one has a connection to her work as a massage therapist. Her other two are more just for the beautiful designs. She made the decision to not have any on her arms or legs so that they would not show in a working environment.

My son's first tattoo was in honor of a deeply loved family friend who died at twenty-eight years old. His second one was a Korean flag. Then he got two stars, one on each arm, which have a special meaning for him. He wasn't as concerned about having them on his arms. He just wears a long-sleeved shirt if he doesn't want them showing. As is quite common with second children, we tend to not get as upset about things. We did pretty well with all of his, as we did with hers once we got used to the idea. But then, he made the decision to tattoo his entire arm. That was a bit hard, even for me. :<) He has had his childhood tattooed on his arm. Honestly, it is just amazing. I almost cried when I saw the red wagon. And the tire swing on the maple tree out front. It isn't all filled in yet, but he has an outline of the state and even a couple dog bones to remember our dog, Lucy who loved being under that particular tree. Whew! How can a mother not love it? How can I not feel proud and warmed that my little boy, who is not little at all anymore, remembers his childhood so lovingly? That he feels it was so wonderful he wanted a permanent remembrance of it on the outside of his body, as well as in his mind and heart? 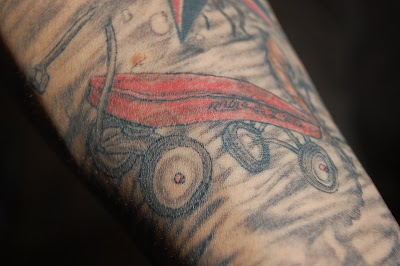 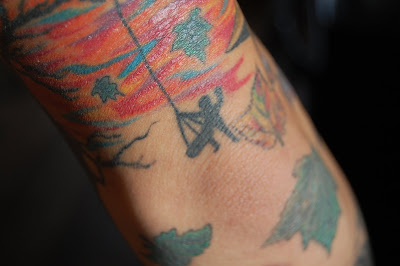 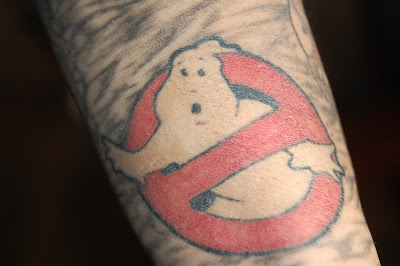