I realized this morning that I haven't written about the work on the bathroom since early August. Toward the end of that month, Tom put in our new sink, which I just love. Check out those cool faucets! We had originally thought of a simple pedestal sink, but then decided on this one for the shelf underneath and the towel bars. At this point it is still a temporary arrangement, held up by bungee cords. Still, we are able to use it just fine. 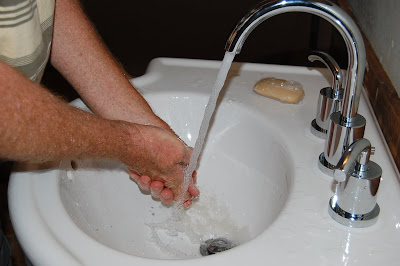 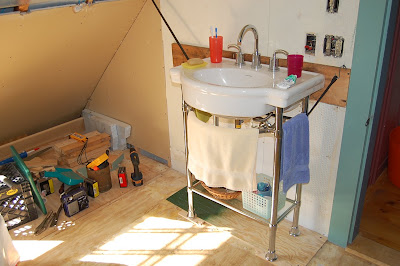 And at this point the work has halted temporarily. We made a decision to have a pine board floor instead of that lovely, but quite expensive, Marmoleum. This had been our original idea, but then we were wowed by the beauty of that African Desert color. Still, there were enough not-so-positive reviews by people to make us leery of spending all that money on an unknown. We know wood. Every room in our house has either a hardwood or pine floor. It works, it is tough, it is beautiful.

The reason we stopped on the bathroom is that it is very liveable right now, with a working sink, toilet, and tub. It isn't beautiful, but it is fine until Tom has some solid time to put in the floor and walls. And we decided to spend our "housework" time on the kitchen. I've done a fair bit of rearranging this week, and now we're going to begin thinking about the walls, cupboards, etc. More on this as we go along. We also have an outside project going that I'll write about soon.
Posted by Nan