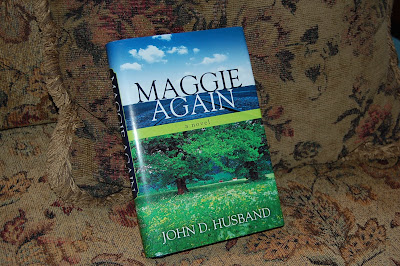 Just about the most moving bit of writing I've ever read is in the play, Our Town by Thornton Wilder. A character has died and is allowed to "go back" for a day when she was a child. She sees her mother as a young woman. She can hardly bear how the living people take their lives for granted. I first read it when I was in high school, and it is pretty interesting to me that with all I've read since, this is what I still think of as "most moving." I wonder if it created my interest in time travel - the idea of being able to go back or forward in time. My favorite book in the genre is Time and Again by Jack Finney. I love this book without bounds and have read it over and over again. Another one I'm very fond of is a young adult book by Nancy Bond called Another Shore. I'm interested in what device an author chooses which allows the character to go back and forth. In Another Shore, the girl turns a corner in the historical village where she has a summer job. In Time and Again, the man sets up an apartment in the Dakota building in New York City surrounded by old things and dressed in old clothes. He looks out on a scene which hasn't changed. Over time, he is able to simply ease himself into the past. I love that. And then there is the movie, Frequency. I'll bet I've seen it five or six times, and I feel the longing to watch it again soon. All of these time travel stories have to deal with the notion of changing the future by an action taken in the past; that the altering of the tiniest detail can have a huge impact later on.

I first heard of Maggie Again through a review Tara wrote. In this review, she actually mentioned my name saying she thought I'd like it! When I couldn't get it through inter-library loan (it was only available at eight locations in the whole country) she mailed me her copy. I was so touched - first with the wonder of her knowing me so well, and second with her sending me her book. She was absolutely right. I loved this book and I can't recommend it highly enough. I was thinking of offering it as a giveaway, to pass along Tara's kindness, but I think my daughter would like it, and I may just read it again.

We meet Margaret Stone, a woman of 74 in 1984, just as she is beginning her retirement from an insurance agency in New York City. She wonders what the future holds for her, and remarks to a co-worker that she'd like to go back and visit her childhood home, Cobblers Eddy, Indiana. Her friend says she has heard of it, which Margaret feels is quite impossible since it is so small that it doesn't appear on a map. The reader is aware of the woman's insistence that she has heard of it or read about it, and recently, too. But Margaret is in her own thoughts and doesn't pay much attention.

The book then takes us back to Cobblers Eddy in 1926. The chapters that follow tell the story of Margaret's life there, when she was known as "Maggie," and how she ended up in New York City. These are idyllic scenes of rural America. My own mother was 13 then, and lived much as Maggie did, surrounded by farms and country roads and hay and cows. It is a time and locale I have always longed for.

So, now comes the hard part in a book review - I want to get you excited about the book, but I really don't want to tell how past and present convene. Let's see. After Maggie moves to NYC, she writes a letter to her three great friends back home, and ends it with a postscript:

P.S. I don't care how you do it, just come. Ride Echo [a cow they ride in the countryside], hop the train, fly, drive, thumb, skate. Just get yourself here. You hear?

These boys take her words seriously, and decide to sneak on a freight train in the midst of their daily chores. All is fine until, at Indianapolis, they hear the car locked so the "riff raff" won't get in for a free ride. And then one of the boys begins to hear music, the same boy who gets intimations of the future.

Do they arrive? Are they 1926 boys in a 1984 world? Will it be Margaret or Maggie they meet? Will young love have a chance?

While reading Maggie Again, I did something I almost never do - I went to the end to see what was going to happen. I got so caught up in their lives that I couldn't bear not knowing. I'll just say, it is a satisfying ending all around. The author makes it all seem believable and possible, as the best writers of time travel do. I so enjoyed being "in" this book. The author does a wonderful job creating rural life in the past, and big city life in the future. The kindly, interesting characters and details of country living would have made this book a good enough story for me, but with time travel added in, I was in my own personal reading heaven.
Posted by Nan