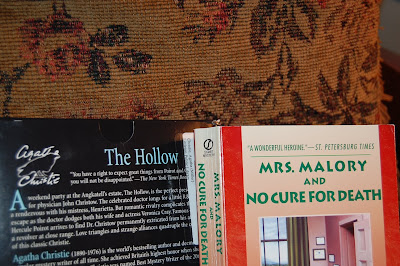 
I found myself in such an interesting reading situation this week. Both my audio book and my print book were mysteries, but there were similarities between the two that quite amazed me. Each book featured a murdered doctor who was not just as he seemed. One had a personable outer self, but was unkind and selfish with his family; the other wasn't liked particularly in his work-a-day world, but was deeply cared for by one who knew him best. These doctors each had a special woman in their lives who would do anything for them, and did indeed do so after their men had died.

Before reading Agatha Christie, I was under the impression that her mysteries were sweet little cozies, filled with murder but tempered with delightful people. What I'm finding, as I read more and more is that her books are complex character studies, with as Jeeves says in the Wodehouse books, "the psychology of the individual." Christie's characters are multi-faceted, not easily dismissed as one sort or another. I have also noticed that in the Miss Marple and Hercule Poirot books I've read, sometimes the sleuths play a very small part in the story, which I found surprising. In most mysteries I've read, the main character is the person, either police officer or amateur sleuth, who solves the crime.

Now, on to names. I listened to The Hollow and didn't have a clue how the names were spelled until I did some looking into the book, thanks to amazon. Do you suppose such names as Angkatell and Savernake exist? Although there were several members of the Angkatell family, I was able to keep them straight, perhaps due to the narration, where each character is "read" differently. I had more trouble with the Hazel Holt book. This may be because I entered Mrs. Sheila Malory's world part way through. Had I started with the first book, I would have met all the villagers and friends gradually, and by this book would have known who was whom. But even with this little problem, I did so enjoy my time in Taviscombe. I liked the people, even the cranky mother of an old friend of whom Sheila says:

I was obliged to go and get myself ready to collect Mrs. Dudley. This was no easy task, since I knew that whatever I chose to wear would be subjected to the silent but critical scrutiny that had been successfully undermining my confidence ever since I was seven years old.

Don't we all know that kind of person?

I like Sheila and want to spend a lot more time visiting her and her community. I think I'll go back and read the books in order now I know how much I enjoy them. I've just ordered the first one, Mrs. Malory Investigates from an online used book dealer.

A character I found quite interesting in The Hollow was Lucy Angkatell. I wonder if I saw a bit of myself in her. I've never read about a character with a mind like hers. From the outside, at a quick glance, one might view her as vague and scatterbrained. She goes off in a million directions at once, not always finishing sentences or expressing herself so that listeners understand what she is talking about. Whereas, what's really going on is that her mind goes so fast that she can barely express what she's thinking before the next thought comes. Both my son and I seem to share this mental characteristic. Tom says we think too fast. :<) I'm not by any means brilliant, but the few things I do think of come fast and furious, and by the time my words catch up to the idea in my head, my thoughts are somewhere else entirely. I quoted another character here on Tuesday. Edward Angkatell is a dreamy sort of man, who happily has enough money so he doesn't have to go out and hold a job. He wouldn't last a minute in the working world. He does indeed pretty much just read and potter about. Hercule Poirot comes into the book as an invited guest because he has a rental cottage in the area. And of course, when the murder occurs, he joins forces with the local constabulary to try and solve the case. He says he has never met such an opponent before, and there is a most interesting resolution to the crime. For most of the book, though, he is not a main character. The story is pretty much a psychological study of different kinds of people - why they act as they do, what makes them tick. The Hollow was a most satisfying book, yet another gem in my Agatha Christie reading. I let go of the challenge a while ago, but I'll keep reading her all my days.

Now a little postscript or addendum: Here is something I'm beginning to think of as the "Guernsey effect." You may remember this quote from The Guernsey Literary and Potato Peel Pie Society:

In Mrs. Malory and No Cure For Death there are two authors whose mention prompts my further attention - Charlotte Yonge and Mary Russell Mitford. About the first, the author writes:

... she's a brilliant storyteller - once you've got into the book you can't put it down. And there's not many modern writers you can say that about.

"The writer," Mary Russell Mitford wrote in her preface to The Village, may claim the merit of a hearty love of her subject, and of that local and personal familiarity, which only a long residence in one neighbourhood could have enabled her to attain." So it was that the circumscribed nature of her world...

Well, those mentions are enough for me to look into the writings of both these authors.
Posted by Nan