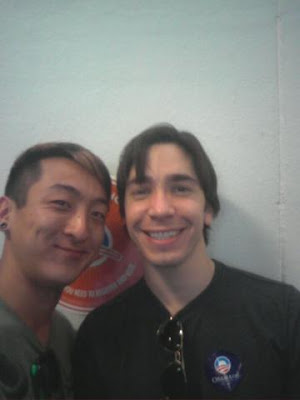 My son, hangin' with the celebs. :<) This is a cell phone photo my boy sent to us. A while ago, Justin Long was at his college, along with Kal Penn and Olivia Wilde. And since then, he went to an Obama rally, and ran into Bill Murray.

Let's see, my only brushes with fame and celebrity, other than shaking Dennis Kucinich's hand, happened in my college days; sharing a dorm with Carl Reiner's daughter/Rob Reiner's sister, and hanging out with Todd Rundgren's sister. The latter impresses my son, the musician, no end, particularly because she gave me a drawing she did of John Lennon because she thought it looked like Tom.
Posted by Nan