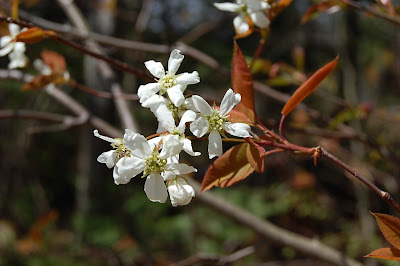 Just about a year ago, I took a "walk on nature's wild side" and mentioned the serviceberry. It is in bloom again, and Tom said he wanted to write about it, so here is our guest commentator:

When I was a kid, my mother always said, "When you first see the shadbush bloom in the woods, the black flies aren't far behind." Kids mostly ignore what their parents say, but for some reason this adage stuck. In fact, I saw my first shad yesterday and called my mother to tell her. She said, "I know. I didn't want to call you." At first glance, shad looks like small apple blossoms; but it's too early in the spring. Shadbush, which is named because it blooms at the time when the shad come upstream to spawn, is also called serviceberry. When I called my mother last night I told her this. She didn't know. Serviceberry blooms at the time of year in northern New England when in the olden days people who had died during the winter were buried. Early May was the month when the burial service took place. Shad or serviceberry, it doesn't matter--here come the black flies!
Posted by Nan