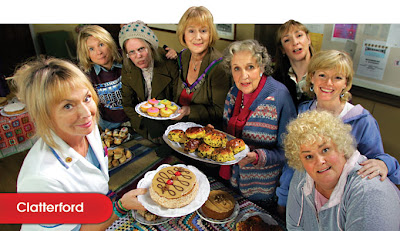 I think I heard about Clatterford from a preview on the Vicar of Dibley, A Holy Wholly Happy Ending. It sounded right up my alley (street) since it is set in a little English village, and was written by Jennifer Saunders and Dawn French. We thought we'd give it a try, wondering if it would be a sort of over-the-top comedy like Absolutely Fabulous. Well, it is, and then again, it isn't. There are some bizarre characters and situations, but there is also a deep humanity and kindness and intelligence. Most of the characters are women, members of the local Women's Institute. The name was Jam & Jerusalem in Britain, which I prefer rather than the village name. If you've seen Calendar Girls, you will have heard the Jerusalem song at the WI meetings. Saunders and French are in it, as is Joanna Lumley (see if you can spot her). Dawn French's character is a factory worker named Rosie, who occasionally hears the voice of "Margaret" - an evil personality who always puts Rosie down. Although this could have been played as humorous camp by the great Dawn French, it isn't. We care about Rosie, and feel badly when the mean woman comes out. She doesn't hear Margaret's voice in church, and wonders aloud to the vicar why he isn't called a "nutter" because he hears the voice of God. There is a great interchange between the two as they are kneeling alone in church, which will be understood by Anglicans or Episcopalians who miss the old words.

Rosie: God is the author of peace and lover of concord. It's gone now, oh!
Vicar: What?
Rosie: Concord. You think God's sad?

Tom says in Shakespeare, it is often the fool who speaks the truth, and that's what we get from Rosie.

There's a woman who is a kind of crossing guard. She carries around her stop sign looking for traffic. There's a woman who was the nurse at her husband's medical practice, but who, since her husband's death, has been replaced by her daughter-in-law who really isn't cut out for nursing. She reminds me a bit of Doc Martin, another show we love, who gives up surgery because he can't stand blood. There's a thirty-something hippie with a child, who just doesn't know what to do with her life. She will be a wind-power monitor if they build the wind station. Or she might 'take a course' and learn circus tricks. Yes, they sound eccentric, and they might be a bit more extreme than normal, but if you live in a smallish place, you see "characters" all around, and you see them accepted for who they are. I've known many in my lifetime.

Here is an exchange between Tip, a receptionist at the surgery, and the vicar.

Tip: [I was] raised by nuns in a cold convent in southern Ireland.
Vicar: It must have been dreadful.
Tip: No, it actually was lovely. I won't have a word said against them. But that won't win you the Booker Prize.

There have been occasional postings in the blog world (including me in comments) which bemoan the fact that stories about awful childhoods and horrible lives win book prizes, and rarely does something joyful or humorous get noticed in that way.

So there you are, my recommendation for one of the best Britcoms I've seen in a while. Mostly older women living an older life in a little English village. I couldn't be happier. Oh, and the icing on the cake is that the theme song is Ray Davies' Village Green Preservation Society sung by Kate Rusby, whose new cd, Awkward Annie, I've just bought at iTunes.
Posted by Nan