Today's poem - Seven Caveats in May by Maxine Kumin 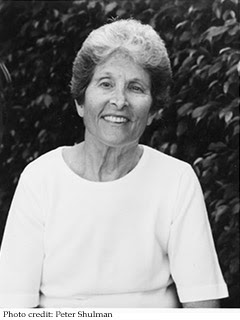 In a comment on the post about the bear and the bird feeders, Beth mentioned a Maxine Kumin poem. It is just wonderful, and so perfectly suited to our situation, except for the fact that Ben and Sadie slept through the whole episode.

Seven Caveats in May

When the dog whines at 5 a.m., do not
make your first mistake and let him out.
When he starts to bark in a furious tom-tom rhythm
and you can just discern a shadowy feinting

taking place under the distant hemlocks
do not seize the small sledge from the worktable and fly
out there in your nightgown and unlaced high
tops preparing to whack this, the ninth of its kind

in the last four weeks, over the head
before it can quill your canine.
But it's not a porcupine: it's a big, black, angry
bear. Now your dog has put him up a tree

and plans to keep him there, a perfect
piece of work by any hound. Do not
run back and grab the manure fork
thinking you can keep the prongs

between you and the elevated bear long
enough to dart in and corral your critter.
Isn't it true bears come down slower
than they go up? Half an hour later do not

give up, go in the house and call the cops.
The dispatcher regrets having to report
there's no patrol car at this time, the state
police are covering. No doubt the nearest

trooper, wearing his Smoky Bear Stetson
is forty miles up the highway.
When your closest neighbor, big burly Smitty
worms his way into his jeans and roars up

your dirt road in his four-wheel diesel truck
strides over the slash pile and hauls your hound back
(by now, you've thrown something on
over your not-quite-diaphanous nightgown)

do not forget to thank him with a sixpack.
Do not fail to take your feeders in on April One
despite the arriving birds' insistent clamor
and do not put them out again

until the first of December.

You may listen to the author reciting it on A Prairie Home Companion, here. Scroll down to segment 3.
Posted by Nan