I go to nature to be soothed and healed, and to have my senses put in order.
John Burroughs


When we bought this farm I was under two misapprehensions. One, that a lot of stray animals would be dropped off here, and two, that there would be birds' nests above doors, on the porch, and under the eaves. Well, in the twenty-seven years (this month) since we bought this place, we have had one stray cat, and then, Ben. And we have never, ever had a nest near the house. The swallows come year after year to the wooden box we put up on the telephone pole out back, and we've had robins in a nest on the side of the barn, and phoebes in the barn, but this is the very first year we've had a bird's nest really, really near the house. Check this out! It is built on a trellis, which supports the Dutchman's Pipe. I am so, so tickled. I moved the bocce balls and badminton rackets from underneath. I so look forward to baby robins. 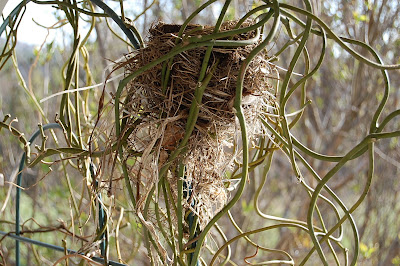 This is the nature I have photos of. There are two features I 'just' saw, and heard of, with no photos. I looked out the window today, up the road, and suddenly what I thought was brush started moving, and it was a mother and baby deer. Simply magic. Then, further afield, my daughter was running a couple towns away today, and a baby bear crossed her path. She didn't see the mother, thank goodness.

And then in closing, here is a picture of the animals in the north pasture for the first time this year. They love being there as, I think, shows in this photo.