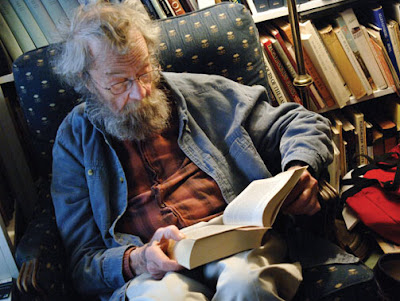 There is a tremendous piece about Donald Hall here, with many photographs of him, and his home. Tom's mom sent us the print issue, and I was so pleased to find it online to share it with you. After his time as Poet Laureate, he says:

I come back to this house, in which I have felt so much emptiness since her death [his wife, poet Jane Kenyon who died in 1995], and because I can't work, I find myself with nothing to do. For so many years I was writing poems about Jane. I've become more and more naked as a poet, particularly after Jane's death. Then I came to the end of that. Something had changed, and language doesn't come to me anymore.


Here is a poem from a 1978 collection called Kicking The Leaves.

White roses, tiny and old, hover among thorns
by the barn door.
For a hundred years
under the June elm, under the gaze
of seven generations,
they floated briefly,
like this, in the moment of roses,
by the fields
stout with corn, or with clover and timothy
making sweet hay,
grown over, now,
with milkweed, sumac, paintbrush....
Old
roses survive
winter drifts, the melt in April, August
parch,
and men and women
who sniffed roses in spring and called them pretty
as we call them now,
strolling beside the barn
on a day that perishes....
Posted by Nan