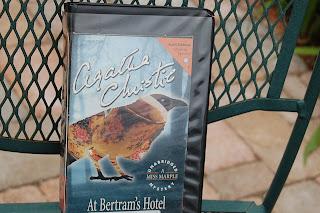 When you step through the door into Bertram's Hotel in Mayfair, London, you go back in time to an England which perhaps never existed, and yet it is the England that older people feel comfortable in. The perfect butler serves afternoon tea with real muffins (quite a big deal is made of the muffins) which even a Scotland Yard detective says is the best tea he has had in a long, long time. The perfect housemaid is just like those who worked in the 'big houses' of the very wealthy, complete with her little cap. The chairs are homey and comfortable, and the seats are high, making it easy for older people to get in and out of. The print on the breakfast menu is big enough that one doesn't need to put on reading glasses. The clientele is made up of these older, respectable people, and of Americans, for this is also an England which Americans love and think of as the 'real' England.

One of the many guests is Miss Jane Marple, who is in London on a sort of sentimental journey. She revisits the beloved places of her childhood. She is nostalgic, yet practical. She is sad an old house is gone, yet recognizes that 'progress' must happen. Her delight in life comes from her interest in people and their actions. Her observations are interspersed among narrative chapters about what is going on. If a reader came to this book fresh, not having heard of Miss Marple, I'm not sure he would know she was the main character. I haven't read enough Miss Marple stories to know if this is the rule, or if At Bertram's Hotel is unusual in this aspect. I found myself wanting to see her more, read more of her thoughts, and hear more conversations between her and Chief-Inspector, Davy. I wonder if his type of policeman is common in the stories. He listened to Miss Marple, respected her opinions, and didn't look at her as a meddling old woman. I did find myself irritated at a small point. Amongst the other policemen, he is known as "Father" because he is older and more experienced. That was fine in those circumstances, but I found it annoying when he was referred to in this way when he is with other people. This broke the rhythm of the narrative for me. Perhaps, it wouldn't have been as noticeable in a print version, but in the audio it stood out.

The story of Bertram's and its guests was very interesting. I liked the way it slowly unfolded, letting the reader get accustomed to how it differed from other hotels. As you might expect, appearances can be deceiving, and all is not what it seems. Outside the hotel, there are frequent robberies taking place, and even inside, a clergyman goes missing.

This was my first book in the Anything Agatha Challenge, and I look forward to reading more about Miss Marple. I'll be interested to see if there is a sort of timelessness about her. I began with a late book and I wonder if the early ones mention events that set them in certain decades. This book had a few mentions of the Beatles, and long hair so the reader knew we were in 1960s London, though at Bertram's Hotel, visitors can easily forget that fact, and may live for a while in an older day.
Posted by Nan