Book Report/A House In The Country 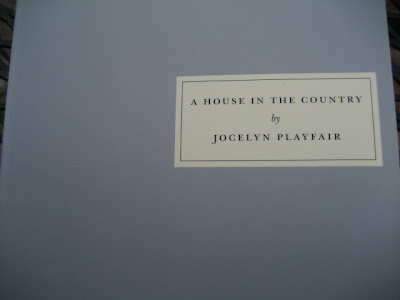 I felt the presence of two of my favorite authors as I read A House in the Country: D.E. Stevenson, and E.M. Delafield. There was Stevenson's description and warmth, and there was Delafield's wit and ironic humor. But the book itself wasn't as well-written or as good a story as books by them. It is set during the Second World War at a country house which no longer has servants, but does take paying guests. The guests have all been touched by the war in one way or another, and are not people who might naturally be together in peacetime. The main character, the lady of the house, is Cressida Chance, a woman alone with a young son. (Not until page 150, does the reader get an explanation of Cressida's past; too long, I thought.) She is much beloved, and is a kind of earth mother; wise, helpful, compassionate, energetic, and stalwart. She deals with the shortages and other domestic problems of war with aplomb. This is a strong woman, who wears trousers (not all that common in those years), and does good solid work, taking care of all these people. She is a deep thinker and very intelligent. Her aunt is appalled that Cressida actually likes living without help, and Cressida tells her:

I'm quite determined never to have any more servants. I feel I've only discovered how to live since the servant question's stopped being a question. I could never again bear anyone else messing about in my kitchen! I feel I'm free for the first time in my life.

My first Persephone book, and a satisfying read it was, sometimes. I felt the beginning of the book was much better than the rest. I think I got "the message" but at times I felt as if I were attending a lecture I didn't sign up for. I liked all the details of domestic life, but I found my mind wandering during the long interior monologues about the world. I suspect that these opinions are worthy, and worthwhile as an historical document of what some people were thinking during the war, but as a story, it didn't work so well for me. There seemed to be types of people, rather than full dimensional people, except for the main character. I wanted more; more interchange, more description, and less philosophy. A little goes a long way in a book of fiction, and there was just too much for me in this book. I am glad I read it, and I particularly liked the ending sentiment, but for the most part it just did not hold up as a great piece of writing. I think it could have been half as long and told the story, such as it was, just as well.

I will warn those who like to come to a book fresh, to wait and read the Preface after finishing the book. I don't know why these usually well-written pieces aren't included after the story.

This isn't a book I plan to keep, so I'm going to offer it as a giveaway. Don't be put off by my opinion. You may love it! If you'd like it, please leave a comment, and I'll have a drawing on Saturday.
Posted by Nan