The big news of the week was that amazing snowstorm. It has all melted away now, but it was pretty while it lasted.

Last year my friend Susy gave me some bloodroot (scroll down a bit to see her bloodroot) and it came up! It's such an interesting plant with big leaves and delicate white flowers. I can't get over how it bloomed even though it is so tiny - two inches tall maybe. 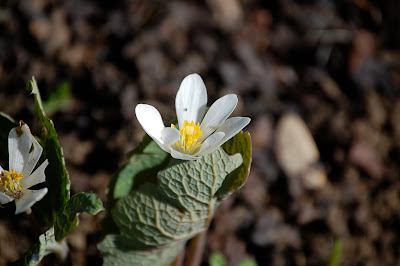 The lily-of-the-valley has popped out of the ground. This is the annual miracle to me. One day there is bare soil, and the very next day, there's something green showing. The bleeding heart has buds on it and in a couple sunny days it will blossom. 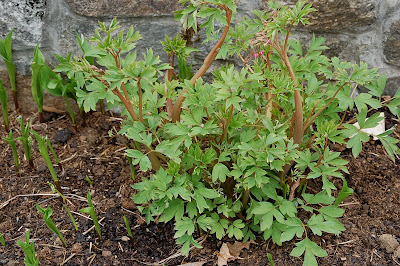 Last spring we didn't put cocoa mulch on and this spring we saw such a difference. Lots of 'witchgrass' and it was much harder to pull out. When we put on cocoa mulch, the weeds pull out so very easily. I know a lot of people use wood chips or wood bark mulch, but I'm just wild about cocoa mulch, though it does cause me to go inside and bake some brownies when I first put it on the flower beds. And then Tom went to all the stores in the area, and found no one is selling it anymore. So, I thought, let's just use our old manure. It is dry and 'composted.' It doesn't smell anymore. It will add nutrients and worms to the flowers, as it now does to the vegetables. And so we did. 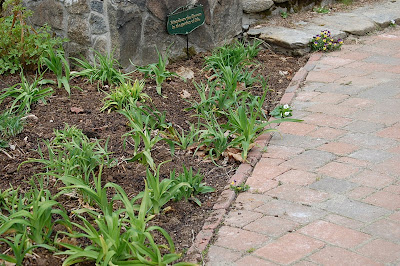 I found another site that talks about planting according to the moon phases, which I mentioned in an earlier Farm and Garden Weekly.

Whatever the origins of these beliefs, there is no evidence to prove it true. I once tested the gardening theory by planting bean seeds from the same pack, half during the waxing moon and half during the waning moon. Both grew well and by harvest, there was no difference between the plants.

And this statement expresses why, even though over the years I've thought it would be fun, and it is a neat idea, I don't really care. I plant when the day is nice and the soil is ready and according to the last frost date.

Tom's mother gave us a hybrid called Panola, a mix of pansies and violas. I decided to plant them in these pretty little pots and put them on the terrace steps. 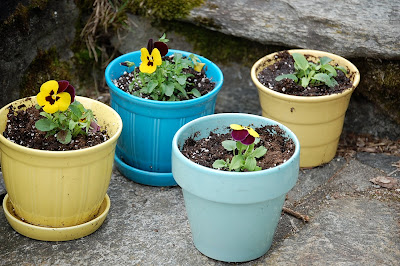 The dandelions have appeared! I love their cheery faces. 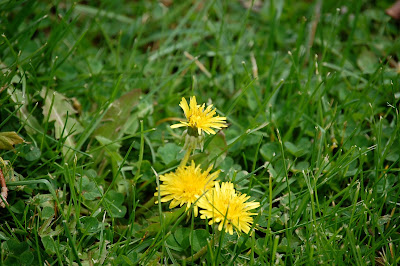 I'll close with photos of the sitting areas from which to appreciate the gardens.
Terrace 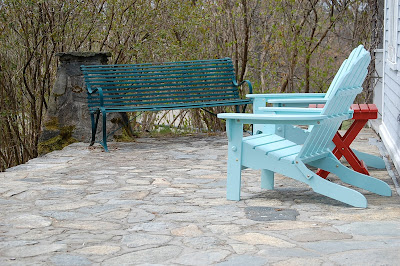 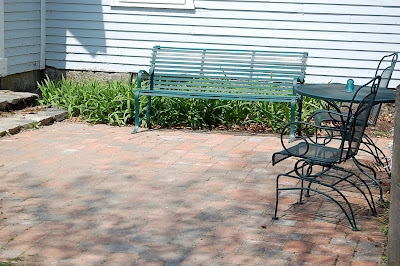 And I think I've found what I want to do outside the kitchen door! Susie Vereker posted a picture, and I thought, 'that's it!' We already have some large stones in the grass, and I think we'll add some more, putting them closer together but not so close that a little grass (or maybe some thyme) can grow up in between. I think this offers simplicity (and no expense since there are rocks everywhere at Windy Poplars), and something different from either the terrace or patio. I thank you, Susie!
If you are interested in the giveaway, you still have today and Sunday to sign up for the drawing!
Posted by Nan