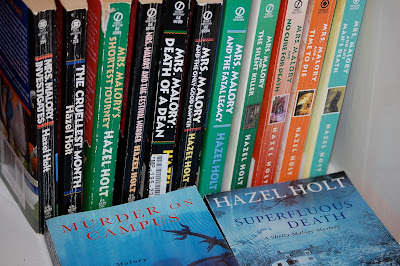 I have been busy on eBay and at online used bookstores buying the Sheila Malory series. I now own thirteen, and have another six to purchase. These are books I want to own because I'm sure I'll pick them up and read them again after I've finished the whole series. I buy what is available and that means sometimes the book is the English version and other times the American. I will never understand why all the publishers in the world can't get together and stick with one name for a book. In my book reports, I've tried to put both titles.

Last month I read these two Mrs. Malorys in a few days time and thought I'd do a book report on both at once. In Murder on Campus Sheila has been invited by her old friend, Linda, at Wilmot, a fictional college in Pennsylvania, to teach a course on 'lesser-known nineteenth-century British women writers' for three months. That doesn't seem like a very long time, and one might think it would be rather uneventful, but of course in a mystery story the reader knows the time will be anything but. After being introduced to the many members of the faculty, and having gotten a flavor for the place, as Sheila is being shown around an adjacent museum, the curator opens an antique linen chest, and lo and behold, there is the dead body of the most obnoxious man on campus, a man hated by everyone. A while later, another man is also murdered. There is a complex trail to follow in order to find out just what really happened, if they were killed by the same person, if the second dead man killed the first one, or if the murders are connected at all. Along the way, we learn more about the star of the mysteries, Sheila Malory. There is a possibility of romance, as well as a moral dilemma.

There are two blurbs on the back of Murder on Campus which I think describe the series just beautifully.

If a cosy detective story is your choice for a bedtime read ... Hazel Holt is just the ticket.
Daily Post

In Superfluous Death, Sheila is back in Taviscombe, her beloved seaside home. We hear about a scheme to build nursing homes, a lucrative business in this community with a large older population. However, the problem is that a woman has settled happily into an apartment in one of the houses the owner wants to convert. She is very old, and hoped to spend her last years in this place she loves. After a little while she dies, not surprising at her age, but soon it is discovered that she was murdered. It is Sheila who happens to find the body, and her attention to detail helps solve the case.

In this book, her friend Rosemary's daughter and family are moving to Taviscombe. Jilly's husband happens to be a policeman, and Mrs. Malory says:

I'm very fond of them both. Jilly is my goddaughter and I regard Roger as a sort of honorary godson. He shares my devotion to Victorian female novelists (I remember thinking this a rather odd taste in a policeman when I first met him) and we often have invigorating arguments about the respective merits of Mrs Oliphant and Mrs Gaskell and similar fascinating topics.

It is passages such as this that endear this reader to the series. There is always a mystery, but it is just another facet of Sheila Malory's daily life. I wish I were her neighbor in Taviscombe, but reading these books is the next best thing.

A recent purchase included a four-book package, and though I already owned one, the price was so good that I bought it again anyway. And now I can offer it as a giveaway! Mrs. Malory Investigates (UK title, Gone Away) is the first in the series. I wrote about it here. If you've never read any Mrs. Malory books, or if you love the series and would like to own a used copy of the first book, here is your chance!

Please leave a comment on any post from now through next Monday, May 17 letting me know you'd like to be entered in the draw. I'll send it anywhere. I will pick a name on Tuesday, May 18.
Posted by Nan