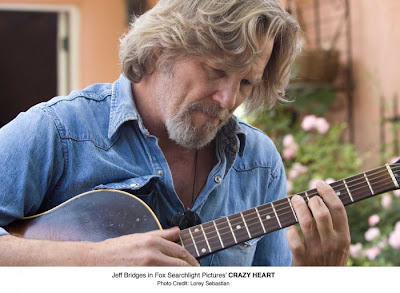 Last week was the spring opening of our small town independent movie theatre. On Wednesdays Tom is the volunteer projectionist for the 5:30 2-for-1 show, a job he's done for many years now. The first movie of the season was Crazy Heart, which I loved. Jeff Bridges was so good in the role that this viewer almost forgot he was acting. Bad Blake is a 57 year old musician who has fallen on hard times, and mostly plays the bars and bowling alleys these days. Bridges does his own singing, as does Colin Farrell. Whoever did the casting deserves great credit for putting Farrell in the role of a younger, much more successful singer who learned it all from Blake. And Maggie Gyllenhaal was excellent as journalist, Jean Craddock, raising her four year old son by herself. If you haven't seen it, the dvd comes out this month.

In the movie Bad Blake makes some biscuits for Jean's son. Well, I've been thinking about those biscuits ever since, and did a search to see if there was a recipe anywhere. I found one at a new-to-me site which is just fantastic called, Different Drummer, which reviews movies and posts recipes connected to the films.

Here is her recipe for Bad Blake's Biscuits:

Sift together dry ingredients.
Add Crisco. Crumble together.
Pour in milk.
Stir.
Spoon on floured board.
Use a bit of this flour to knead your dough.
Roll out 1/2 inch thick. Cut out with biscuit cutter.
Place in greased pan.
Dab a small piece of Crisco on each biscuit.
Bake 18 minutes at 400 degrees until golden brown.

My notes: as you know by now, I always use butter. And because of my new-found love for buttermilk, I used it instead of regular milk. For other recipes, just type buttermilk into the search bar, or look on the sidebar under Sharing Recipes from a Hill Farm.

I baked them a bit longer than 18 minutes. And I put them in a greased 9x13 pan, which I've never done before. I've always used a cookie sheet. I love how they turned out and will probably do this from now on. The taste is out of this world! I've loved other biscuits, and even posted some recipes here, and it just may be that you can't go wrong no matter how you make 'em. 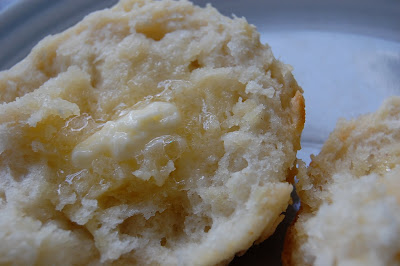 Addendum: I made these May 9, 2013 and today found them way too salty. Next time will reduce one or all of the cream of tartar, baking soda, and salt.
Posted by Nan