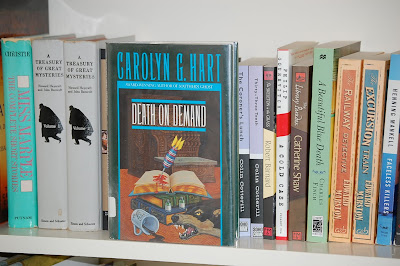 Death On Demand is a mystery lover's perfect book. Not only does it feature a mystery bookstore, but it constantly refers to mystery writers, old and new.

For all of us who have dreamed about owning such a store, the description is simply heaven. Annie Laurance has inherited it from her uncle.

Under his stewardship, Death On Demand had been a wonderful place, a pipe-smoky, dim, comfortable, welcoming center for writers, but she had taken the shabby, down-at-heels interior and fashioned it into a bookstore even Carol Brener and Otto Penzler might envy, discarding Uncle Ambrose's functional steel shelving for the softer orange-brown gleam of gum, reflooring with heart pine, and creating, on the right, between the diagonal shelves slanting off the central corridor and the south wall, an enclave of American Cozy, a cheerful space scattered with rattan chairs with soft yellow and red chintz cushions and cane-topped tables.

... hanging beads marked the arched doorway that led to the children's corner, and its stock of all of the Nancy Drews and Hardy Boys, plus lots of nail-biters by two-time Edgar winner Joan Lowery Nixon. Annie had pined for just such a corner full of treasures when she was a kid.

She didn't believe in lumping all the books together alphabetically. Cozy readers would never dream of picking up a horror story. Hardboiled enthusiasts would prefer the Yellow Pages to romantic suspense. The first case held Agatha Christies because, quite simply, these were and always would be Annie's personal favorites. She never tired of Dame Agatha's perceptive eye and clever plots. On the left side, the shelves held true crime books. These had been Uncle Ambrose's specialty. Everything from Lizzie Borden and Jack the Ripper to the Boston Strangler and Capt. Jeff MacDonald was represented here. Annie passed the spy novels and thrillers on the right and the caper and comedy mysteries to her left. ... The south wall held classic mystery books, John Dickson Carr through Edgar Wallace.

Annie offers a weekly event called Sunday Night Specials, when the store is open only to local writers. Each week one of them presents a program connected to mystery literature, such as 'tracing the history of the comedy mystery.' Though these evenings sound wonderful on the outside, the reality is that there are some unpleasant personalities who are causing friction within the group. And then on a particular Sunday, the lights suddenly go out and one among them is murdered. And another murder had taken place at a veterinarian's business not too long before this one.

Annie finds herself in the position of being suspected by the local policeman. She has motive and opportunity in his way of thinking. So, of course, Annie and her old boyfriend Max, who had just come to visit must find the perpetrator(s) before Annie is arrested. Max is trying to woo Annie again, but she feels they are just too different to ever become a serious couple. Part of the fun of the book is their relationship.

Death On Demand takes place on an island off the coast of South Carolina, a particularly beautiful location with 280 growing days a year! There is some tension between the original population and those who have come to the island and built mansions.

There are many instances throughout the book where Annie's knowledge of mystery books and movies serves her well, and offer pure delight to the reader. Some I recognized, while others were new to me. At the end of this post, I have offered a few links. Click on any of the names for information.

Annie felt a surge of adrenaline. Her body recognized danger. In a flash, she remembered the boarder in Mrs. McGinty's Dead. If it hadn't been for Poirot, the boarder would have been hanged for a murder he didn't commit.

"I'll bet Dr. Thorndyke could have found some traces if he'd been there with his small green box."

The last time she broke into someone's house, the results - for her - were catastrophic. Think of what happened to Grace Kelly in Rear Window.

"Everyone in the family kowtowed to that horrible, domineering old monster. It was just like Mrs. Boynton in Appointment With Death.

"And don't worry, Ingrid, Max and I are working on it."
Ingrid's face brightened. "Like Pam and Jerry North."

The book has humor, romance, and a good mystery. And it has maps which I love. 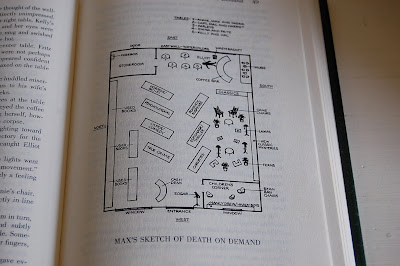 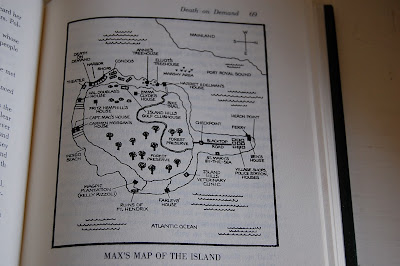 There are now twenty books in the series, with the latest published this year. I have the second one on my desk, which I'll begin today, and I look forward to hours of reading pleasure in the Death On Demand bookstore, in the company of Annie and Max. Carolyn Hart's homepage tells a bit about the books as well as other series which she writes.

Though this series has been on my reading radar for years, it was Marcia's excellent review of the latest book which convinced me to finally begin.

Pam and Jerry North
Addendum, June 10, 2010:
I began the second book, Design For Murder, and was at first pleased because it didn't follow the pattern of the first one. The murder didn't take place until almost halfway through the book, though I did know the identity very early on. But then when the murder victim was found, there were police again doubting Annie Laurance's innocence, just as in the first book. It drove me crazy. I thought, here we go again. I looked ahead a bit wondering if this scrutiny of her continued and it did. I closed the book. I also found her personality a bit grating. Things I found okay in the first book became more annoying in the second. Sadly, I doubt I'll pick up another in the series.
Posted by Nan