The Torso by Helene Tursten 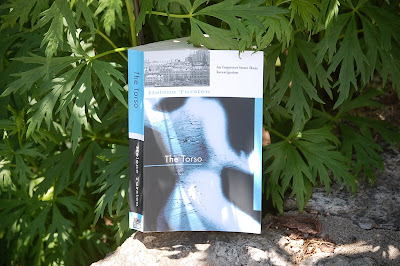 As I sit down to write this book report, it is a beautiful, really perfect early June day. The sun is shining, the temperature is warm but not hot, flowers are in bloom. The story in The Torso doesn't seem to belong. Horrific deeds shouldn't happen period, but especially not on such a blessed day. Well, we know that isn't true. Ugliness is juxtaposed with beauty every minute.

The book takes place in this same season.


The rain had slowed to a drizzle. The air was fresh but still mild. Steam rising from the warm earth smelled good. The early summer foliage was at its most beautiful and everything breathed hope in the face of the oncoming summer.

You know that a book called The Torso is not going to be pretty. The torso is found by a black Labrador in a little children's pool on the ocean front. It is in a black plastic bag. And to make it even worse, the internal organs have been removed. I'm sure I can feel you wincing, as I did myself. And you may be wondering, how could she read on. Well, it wasn't easy going in some parts, but honestly, I am so fond of Irene Huss that I'm willing to follow along on her cases regardless of how tawdry.

It is quite different reading crime fiction written by a woman.


After almost twenty years as a police officer she had seen everything, but not all at once. That was what nauseated her about this area. ... She felt violated and degraded as a woman.

The investigation leads to a similar crime in Copenhagen, Denmark, and so Irene and her fellow workers travel back and forth from their home in Göteborg (Gothenburg), Sweden over to Copenhagen.

In the ferry bathroom, Irene sees a yellow plastic tub hanging on the wall with a sign 'used syringes.' And in the hotel, she finds a tourist guide with a section called, 'Copenhagen After Dark.' These are little hints of the kind of experiences she will have in the city.

While in Copenhagen, there is an additional, more personal job that Irene must do. A former neighbor of Irene's has asked if she can find her daughter.


"She won a beauty contest last summer and after that she wanted only one thing ... to become a photo model. She refused to continue going to high school. And she had also had contact with a modeling agency in Copenhagen."
Irene jumped in. "How did she get in touch with the agency?"
"Through an ad. They were looking for Swedish girls who were willing to work in Copenhagen."

What the mother knows (or thinks she knows) is that the girl had gotten in touch with a female photographer. The trip was arranged and the photography agency set up an apartment for the girl and two other girls seeking the same employment. The mother hadn't been over to visit, though the daughter had called her off and on, sounding busy and happy.

When Irene gets to Copenhagen, she is told by her colleagues there that:


Copenhagen lures hordes of young girls, consumes them, and spills them out onto the trash heap after a few years. They often come here with dreams of making a career in the theater or as photo models. The reality is something completely different.

You may have heard the song, Wonderful, Wonderful Copenhagen; well,The Torso shows us another side - scary, seedy Copenhagen. I guess every place has its dark underbelly but this one seemed particularly bad and sad.

I need to stress that this book deals with some very sordid stuff. Irene is disgusted, and also feels a sense of guilt because a later murder may have occurred because of her investigations.


She had never reacted so strongly to a murder investigation before. ... She wanted vengeance. She wanted to avenge herself for having been used for the killer's purpose.

Even as I write the warning, I want to say that I really, really liked this book, as I did Detective Inspector Huss. The pace is so fine, so right. And the life the police inspectors lead as they are working on a case is well-described. We read of the restaurants they visit and what they eat and drink. Irene's clothes are noted. Even as they are involved in such gruesome crimes, they still must live their lives. We discover that one of the policemen has a drinking problem, and that two others are getting married. Irene's home life isn't as problematical as in the first book, but still the girls are now nearly seventeen, and becoming more separate from the family life. There may be a new puppy joining the family; a son of their dog Sammie. The relationship with her husband is still strong, though she does find herself attracted to a man on the police force in Denmark. What I am trying to say is that these books aren't all about the crimes. Rather they are about the solving of the crimes, the slow, slow process involved in gathering clues, the part that luck plays, the hard work involved. As I noted in Detective Inspector Huss, I've not read any mystery, any crime novel that has showed so truly and honestly the process, the procedure, the actual job of the police. And the officers aren't spared grief. Sometimes their own families are involved in criminal atrocities.

Unless we are involved in a crime, we can turn away from the horrors, but this series shows how those affected, and the police who must solve those crimes have to stay the course until the murderer has been found. This case has a particularly surprising ending that felt just right to me. I have the third in the series, and so far the last, on my shelf which I will begin soon. Tursten is an amazing writer.
Posted by Nan