If you live in an 1800s farmhouse in the middle of fields and woods you will have mice. It is simply a fact of life. We'll go months without seeing a mouse, and then one morning we come down and find mouse droppings on the kitchen counter. They come up from the cellar I think, and make their way to the counter from behind the refrigerator.

And if you've been reading my letters for any time, you will know that we are vegetarians, and that our farm animals live until they die naturally, and thus it follows that we aren't going to catch mice in a trap that kills them. For years and years we have used the Havahart brand of trap and it has worked well. The mouse is then transported away from the house into a stone wall down the road. But for some reason, in the past couple weeks, the mouse would eat what was put in the trap but not get caught. Tom went looking for a new Havahart, thinking ours was simply old and not working well anymore. The store he was in didn't offer that brand, so he bought another called Victorpest. You may recognize the name. All the old killer traps were Victors. The Victorpest was a little bigger, and they claim it will hold 3 or 4 mice. Well, ours didn't need to attempt that particular feat because ... well, here's the story. In the evening, we caught a mouse. Tom took it outdoors, and set the trap again. He used peanut butter as they advised. Soon, there was another mouse inside. Tom trekked down the hill again. He decided to stay downstairs last night to see what happened. Over the course of the night, four more were caught, and Tom made four more trips, guided by the almost full moon. What a success! 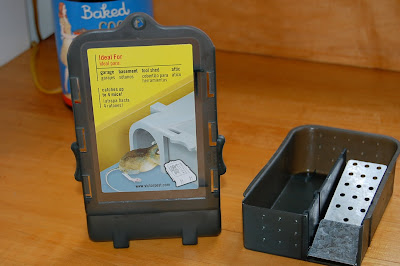 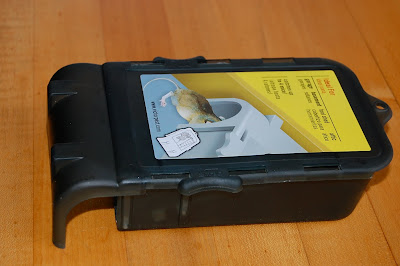 Where we set it on the counter; the fridge is to the left of the lamp 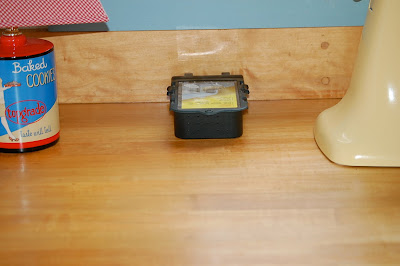