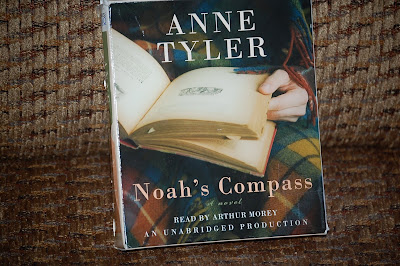 
My favorite Anne Tyler book, which I mentioned here, is Back When We Were Grownups. And now Noah's Compass has quickly become second on my personal list. I feel that her great, great gift as a writer is in her details. Details of places, and of the thoughts inside her characters' minds. I feel I know Liam Pennywell. In fact, I feel as if I've known him my whole life; that maybe he was someone I went to school with. He is sixty years old, widowed once, divorced once, with three daughters. One is from the first marriage to a young woman who killed herself, and the other two from his second wife. Though the couple are divorced, they have contact. There isn't acrimony between them. He also has a young grandson.

Liam has lost his teaching job because the two fifth grades in the school have consolidated into one. He moves into a new apartment and, because he forgets to lock his sliding glass door, someone comes in and hits him over the head, and bites his hand. Liam has no memory of any of it. The last thing he recalls is falling asleep. He wakes up in the hospital and is terribly unsettled because he can't remember what happened. He isn't particularly worried it will happen again. He isn't afraid to go home. But he hates having lost the memory of something that occurred in his life.

Liam meets a woman in her late thirties, who may just be the love of his older years. She's a very interesting character, with many quirks and opinions some of which are unusual and others which are, to my mind, quite charming. One of them is that she doesn't use the big highway because she doesn't like the 'peer pressure' of getting off the ramp onto the road.

The book explores their relationship, and also the relationships with his family. His youngest daughter Kitty ends up living with him for the summer. He babysits his grandson sometimes. During one of these times, the boy asks about Noah's ship (ark). In Liam's response, we find the source of the book's title.

... he wasn't going anywhere. There was nowhere to go. He was just trying to stay afloat. He was just bobbing up and down so he didn't need a compass. ...

In a few words, Anne Tyler gives the reader such a strong impression of his ex-wife's kitchen:

Liam loved Barbara's kitchen. It had never once been remodeled as far as he knew. ... The general look of it dated from the 1930s. ... Even the plants on the windowsill seemed old-fashioned; a yellowed philodendron wandering up to the curtain rod and down again; a prickly stunted cactus in a ceramic pot shaped like a burro.

I truly loved this book; the quiet, the characters, the way we get to know Liam so well. This isn't a story filled with drama or tragic events. The reader gets to spend some time in the company of these very human people, and I feel all the richer for it. Her characters become as friends. I love a book that shows people can have happiness in so-called small ways.

I will close my book report with some of the words which end the book. They will decide for you whether this is your kind of book or not. It sure is mine.

He leaned back against the cushions with a contented sigh. ... Socrates said ... What was it he had said? Something about the fewer his wants, the closer he was to the gods. And Liam really wanted nothing. He had an okay place to live, a good enough job, a book to read, a chicken in the oven. He was solvent, if not rich, and healthy.