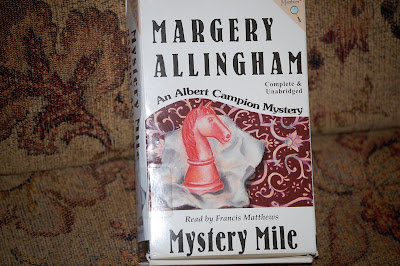 
On the back of the box of tapes it says that Margery Allingham introduced Albert Campion as a secondary character in The Crime at Black Dudley (1929), and that she grew so attached to him he became the central character in Mystery Mile (1930) and 19 more Campion mysteries.

Isn't that just delightful to think of a writer becoming 'attached' to a character?

I recently bought the first in the series in a beautiful edition from Felony & Mayhem. I have mentioned this fantastic company several times on the blog. They offer a great selection of the Campion books with simply beautiful covers. I fully intended to begin my Albert Campion adventure with The Crime at Black Dudley, but one day at the library, while looking for an audio book, Mystery Mile jumped right out at me and whispered, listen, listen. So I did. I loved it. In fact I loved it so much, I plan to buy a print copy from F & M.

The book opens on an ocean liner going from the US to England. There is a conjuring entertainment on board and a volunteer is requested. A young man rushes to the stage and saves the man from what would have been certain death. The man is an American judge traveling with his adult son and daughter to escape being murdered by a criminal group at home. Clearly, the group called Simister (yes an m, not n) has followed him and will stop at nothing until their target is killed. The judge's savior on board ship is none other than our hero, Albert Campion, an unlikely hero in appearance and demeanor. He is a little like Bertie Wooster, but with the brains of Jeeves. He comes up with a plan to bring the judge and his family to a place called Mystery Mile, an isthmus (I feel like the little boy in The Music Man when I try to say that word!) in Suffolk, where only a few families live. Campion is old friends with a young woman and her brother and hopes their home will be a refuge for the judge. Of course it isn't. There are many adventures in store for our little group, both dangerous and romantic. There is mud which is like quicksand. There is a disappearance from a maze which has no escape. There is a mysterious fortune teller who comes, after whose visit a much beloved friend commits suicide.

Albert Campion was a bit of a mysterious fellow himself. I thought I couldn't figure some things out because I hadn't read the first book yet, but from a bit of reading I've done, this is the case throughout the series. We don't learn everything about his past, his family, or his manservant, a former burglar named Lugg.

I loved every minute of my time within these pages. I so look forward to each book in this long series. Margery Allingham is considered one of the queens of Golden Age detective fiction, and now I know why. The only mystery to me is why I didn't begin reading these books long ago. I have seen a few of the televised versions, and now that I've met Mr. Campion in print, I see that Peter Davison was the absolute perfect choice to play him. 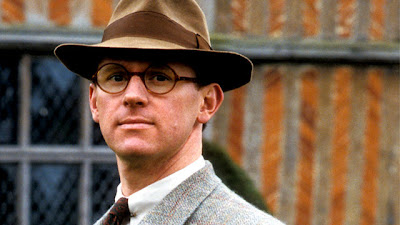