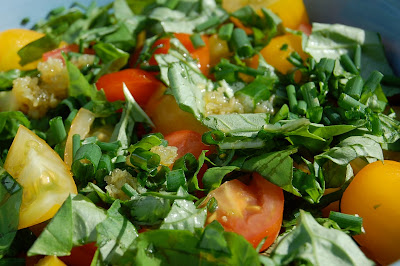 This is a variation on a recipe I cut out of Martha Stewart Living magazine last year. Today is the first time I've made it and it won't be the last. My gosh, this was delicious! And about as good for you as anything could be! I'm going to leave the amounts of ingredients up to you. We made ours separately in our own bowls but you could make a big batch and divide it later. The grape tomatoes and basil were both organic and locally grown in a greenhouse, and the chives were from the garden. I didn't toss the ingredients before taking the photograph so you could see the individual items.

Late Spring Salad
Put garlic cloves through a press, or mince, and heat very gently in olive oil for about 5 minutes. Pour into a small bowl and let cool maybe 10 minutes.
Chop tomatoes (grape, cherry, or big) and put in bowl.
Chop basil and chives and put on top of tomatoes.
Drizzle the garlic and olive oil over the top.
Sprinkle on salt and pepper as desired.
Posted by Nan