A Nun in the Closet by Dorothy Gilman 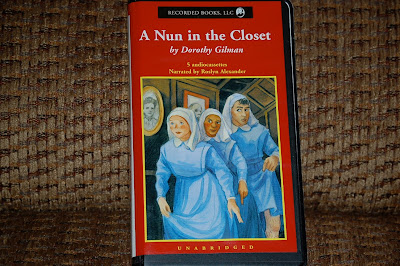 34. A Nun in the Closet
by Dorothy Gilman
mystery, 1975
unabridged audio read by Roslyn Alexander
finished, 6/23/10


One of the reasons I enjoy writing my book reports is that I must stop and really think about a book. In the case of A Nun in the Closet, I found myself wondering just what has drawn me to the story, not once or twice but about six times! I listened to it so many times on Recorded Books that I finally bought my own copy a few years ago. Obviously, I love this book. But what keeps bringing me back to it?

The story goes like this. A house in New York state has been left to the cloistered convent of St. Tabatha in Pennsylvania by a Mr. John Moretti. Mother Clothilde, the head of the Abbey sends two nuns to investigate the place and to think about what might be done with it. Sister John and Sister Hyacinthe take off in a loaner delivery van after Sister Hyacinthe learns to drive, sort of. She is an herbalist with her head rather in the clouds. Sister John is more practical and capable, but both of them are very unworldly. The last event they really know about was when a television was brought to the Abbey so they could watch that nice Mr. Glenn orbit the earth in 1962.

The house is on over a hundred acres of woods and fields. It is rather dark inside because of the wisteria which has grown over the windows. It is atmosperic to say the least. There is a secret staircase, money in a well, big jars labeled sugar which are not sugar at all. They come upon a wounded man who is healed by Sister Hyacinthe's herbal remedies. He has been shot, and to keep him safe the nuns dress him in a habit and keep him hidden. The sisters meet young people who are helping migrant workers pick beans, a bigoted scary sheriff, a mystical young man who throws the I Ching, and the Mafia. Whew! That's a lot of living for these nuns. Sister John handles every situation with aplombe, and her 'perfect faith.'

It is 'dated' but in a very good way. We see America as it really was in the mid-1970s. The people are kindly and gentle souls except for the villains. They support one another, accept one another's beliefs, do good toward others. If you are feeling jaded about the world, it will renew your good spirits. If you want to know how a lot of young people felt in 1975, it will teach you through the example of the characters. If you believe in 'many paths, one goal' the book will give hope to that belief. If you like to read about people who don't whine, but work on the solutions to problems, you will find them in abundance here.

In addition to all these wonders, it is a plain good story. Interesting, intriguing, and fun. It is very well-written, as are Dorothy Gilman's Mrs. Pollifax books, which I have also listened to over and over again. She is one of my favorite writers and I am thrilled she was the Grand Master at the Edgar Awards this year.

One of the best quotes I've ever heard comes from Sister Hyacinthe:

I've never understood how anyone can doubt God after seeing an egg.