Silence of the Grave by Arnaldur Indridason 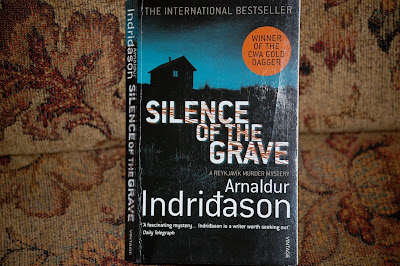 As in all new estates, the children played in the half-built houses, climbed up the scaffolding, hid in the shadows of solitary walls, or slid down into recently dug foundations to splash in the water that collected there.

What an eight-year old boy finds in one of these foundations is an old rib bone, and so begins a mystery that bridges sixty years.

Grafarholt used to be rural countryside outside of Reykjavik.

But the city had spread across the bays and hills as the rural population depopulated. A modern city swollen with people who did not want to live in the countryside or fishing villages any more, or could not live there, and came to the city to build new lives for themselves, but lost their roots and were left with no past and an uncertain future.

This is the modern day Grafarholt that Erlendur would see as he investigates the bone. 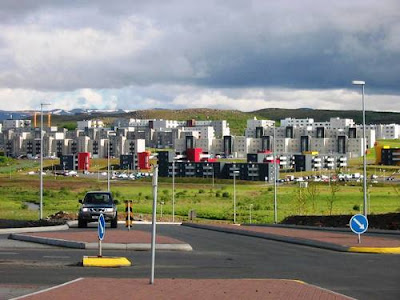 The book goes back and forth between modern day police trying to discover who it belonged to and why it was there; and the story of an extremely abusive husband and his family. The reader puzzles about a connection but there are so many twists and turns that when the ending revealed all, I was surprised. I had to avert my eyes from some of the descriptions. I read enough to get the gist, but honestly some of the details made for difficult reading. How I hated that man. What made it especially terrible was a scene of the husband shaking hands with the police as they left the house without doing anything, though they saw the woman's injuries. We later find out this is a family of many years ago, and the reader might think, 'well those days are gone' except I know they aren't, and the author knows it, too. Erlendur encounters the same situation, asks where the man is, and the woman tells him:

If you're going to take him, make sure you kill him. If you don't, he'll kill me.

And we all know the truth in her fear; and how seldom restraining orders work.

As I read on in the book, I came to realize that it is a story of families and how some can go wrong, and some can go horribly wrong. What should be a source of refuge and peace and support can become exactly the opposite; from Erlendur's own family to the family with the cruel father in the past to the family with an abusive father and an addicted mother, whose child is taken away in the present.

Erlendur suffers the guilt of a man who left his wife and children many years ago. We met his daughter in Jar City and she comes into his life again in this book. Other than losing a child to death, this policeman's situation really couldn't be worse. Eva Lind is an addict who lives the life no parent can bear thinking about.

We know that Erlendur is a great reader of books about 'ordeals in the wilderness' and his knowledge of such things gives him guidance in solving this case.

"Someone sets off from a farm, say. It's the middle of winter and the weather forecast is bad. ... He loses his bearings. Gets lost. In the end he gets covered over in a snowdrift and freezes to death. By then he's miles off the beaten track. That's why the body's never found. He's given up for lost.

That's a typical Icelandic missing person scenario and we can explain it and understand it because we live in this country and know how the weather suddenly turns bad and how the story of that man repeats itself at regular intervals without anyone questioning it. That's Iceland, people think, and shake their heads. ... There were rarely grounds for treating such disappearances as police or criminal matters.

What if people said so-and-so had set off for the moors or another farm or went to lay a fishing net in the lake and was never heard of again? A search is mounted, but he's never found and is given up for lost."

"So the whole household conspires to kill this person?" Sigurdur Óli said.

"Then he is stabbed or beaten or shot and buried in the garden?" Elínborg added.

"Until one day Reykjavik has grown so big that he can't rest in peace any longer," Erlendur said.

It is such details which bring Iceland alive to the reader.
How the police come up with information about the past, and about the people who used to live on that hill before it changed beyond all recognition makes for fascinating reading. There were both English and American barracks and the reader wonders if somehow soldiers from the Second World War could be involved. There's a man whose fiancée apparently drowned, and we wonder if the rib is hers. He himself died many years ago, and his niece has all his papers in her cellar. She hasn't been able to bring herself to go through the morass of boxes. A good argument is made for not holding onto clutter.

The cellar measured about 90 square meters and ... full of boxes and more boxes, some labelled, but most not. There were cardboard boxes that once contained wine and cigarettes, and wooden crates, in all conceivable sizes and filled with an endless assortment of rubbish. In the cellar were also old cupboards, chests, suitcases and sundry items that had accumulated over a long time: dusty bicycles, lawn mowers, an old barbecue.

Horrors! Yet, some important information is found there after days and days of searching.

I cannot praise this book highly enough. It was a perfect followup to Jar City. With each book, we learn more and more about this interesting, thoughtful Inspector Erlendur. We learn about Iceland. And we follow investigators as they pore over clues until they have solved the case. Along the way, we see human nature at its best and worst. I have the next two in the series on my shelf, and will continue buying them as long as Arnaldur Indridason continues to write them, and Bernard Scudder continues to translate them into English. I'm hoping at some point, the first two will be translated.
Posted by Nan