Farm and Garden Weekly - week of May 2 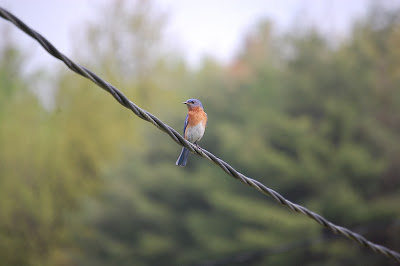 A bluebird visited this week. This usually happens once a year, and then that dear little bird goes somewhere else to live. I'm happy to have even a glimpse of such loveliness. The picture was taken through the laundry room window - I didn't want to take a chance and open it for fear the bird would fly off before I could get a photo. 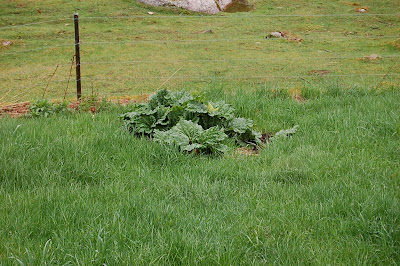 The rhubarb is growing to beat the band! I've picked eight cups already. We have four plants. There was one here when we bought the house (one of the very few plantings) and since then we've divided it and bought one plant. They are all thriving. What an utter treat to have it, and the chives which grow faster than I can use them! 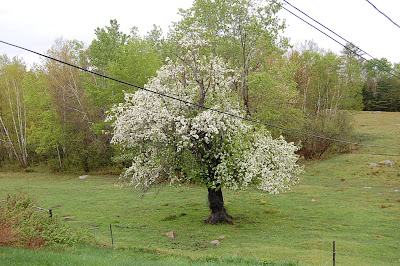 The north pasture crabapple is in full bloom, and so lovely.

We bought our place from a woman whose family had owned it since 1919. I'm quite sure there was only one owner before that. Anyhow, as you might imagine, it was a melancholy thing for Barbara to sell it. Her mother and sister had continued to live here, only summers for the previous twenty-five years, until both their deaths. She was so pleased that we loved the place and didn't want to subdivide it, and wanted to have it as a farm that she reduced the price by $10,000! She had one request: would we be willing for her to keep the old Duchess apple tree? We of course said yes, and the lawyer was fine with it. He said that she just needed to hold onto a bit of the old place. She came over for a few years during apple picking time, but then the visits became fewer and fewer. Barbara died maybe four years ago, and recently our lawyer suggested we might want to get a release form signed by her children. I've been in touch with her daughter who still lives locally, and she's fine with that. She asked if she could take some cuttings from the tree, and I said yes, anytime. The tree itself is in amazing shape. Who knows how long it had been here before Barbara's parents bought the place in 1919? We had a ten-minute tornado-like storm in 1998, and part of the Duchess was broken off, but though it doesn't look too pretty in shape, it still blossoms and bears fruit in the fall. Mostly, the animals eat the apples nowadays. We've learned over the years that people who know these trees, cherish them. They are very special to them, and are the basis for many childhood memories. The official name is Duchess of Oldenburg.

Duchess of Oldenburg—Russia, seventeenth century, imported in 1835 by the Massachusetts Horticultural Society—a yellow early apple with crimson stripes and splashes.

One of the best of all pie apples. 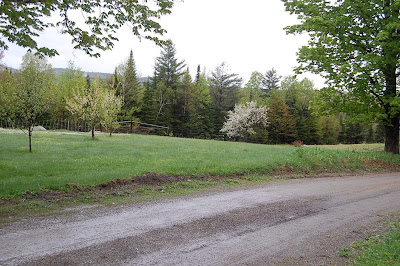 The Duchess is the furthest down the road. The closer one in bloom is the plum. I wish I could put the fragrance on the blog as well as the picture.

It is rainy and raw today. The rest of the week has been quite cool and very windy. In fact one evening we lost power for a couple hours. Everything is green, green, green.
Posted by Nan