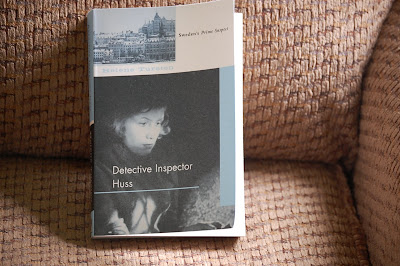 Reading this book felt a bit like being on a real case - slow moving, many details, thoughtful, dead ends, useful and useless information. I've read police procedurals aplenty but not one has ever made me feel a part of the procedure as this book has. The reader sees the police department working as a team. They get assignments, and then come back and have a group meeting which they call, 'morning prayers,' and try to make sense of all the information obtained. This is the 1990s, and sexism is still a palpable thing on the force. One policeman is quite aggressively awful, but even a kinder man has a hard time getting rid of old prejudices.

Detective Inspector Irene Huss is the one we follow along in her daily work in Göteborg. She is approaching forty with a bit of trepidation. She is a judo champion. She has twin thirteen-year old daughters. There is a family dog. And she is very happily married, a state I've seen infrequently in this sort of book. The reader learns how very difficult it is to balance family life with work when Irene comes home after a very stressful day dealing with unsavory types. One of her daughters joins a skinhead band, and tells her mother the Holocaust never happened, which as you may imagine causes much fear and anxiety in her parents. The problem is solved in a unique and meaningful way.

The crime in this book is the murder of a very rich man. Slowly, we meet his family and his friends. We learn of his past, and the pasts of the other characters in the book. The police must make some connections in order to solve this case. Early in the book the police go into his home.


Irene gazed up in wonder at the walls of the stairwell. The frescoes were amazing, with children romping among wood anemones and an allegorical figure of Springtime, flying in a cart drawn by huge exotic butterflies. It was all done in light, elegant, springlike pastels. On the opposite wall was a full Midsummer Eve celebration done in considerably richer and more intense tones. Grown-ups and children danced in the summer twilight, and the fiddler sawed away at his instrument for dear life. His face was shiny with sweat; his eyes glistened with the joy of making music.

"Carl Larsson did the paintings, in the early eighteen nineties."


Can you imagine! I've long loved Larsson's paintings of his home and family. This one is called Spring. 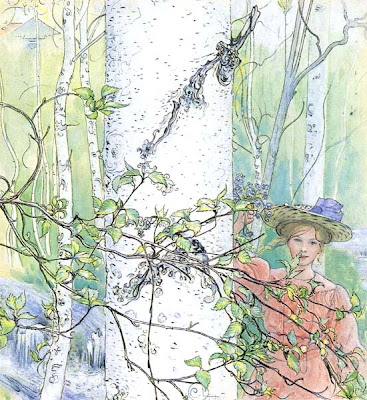 The book shows us how very difficult it must be to live a regular life when one's work life is so often full of the very worst of humanity; terrible crimes, terrible people. Once an investigation begins, the police have no idea what they will uncover, but they know it won't be pleasant. Their own lives and emotional well-being are on the line every day. We all know this, but Detective Inspector Huss brings home that truth to the reader. I won't go into more detail, because I know that I like to discover a story rather than know what it's all about beforehand. I'll just say that I found myself absorbed and fascinated. The book, the way the case is explored, and getting to know Irene and her co-workers held me in thrall. I've just received the next two books in the series from the wonderful Book Depository, and have already begun the next one called The Torso.

If you, too, are finding yourself simply wild about Scandinavian and Icelandic crime fiction, here are some sites you will enjoy. Euro Crime, which isn't limited to just Scandinavia and Iceland; Scandinavian Books (scroll over to the right if you don't have a big computer screen), and their blog, Nordic Bookblog; and Scandinavian Crime Fiction.
Posted by Nan