The Return of the Soldier by Rebecca West 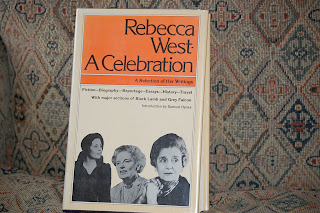 
After I read Thomas' review of this short novel, I wanted to read it immediately. What an amazing story. West's writing reminded me of Virginia Woolf's just a little; her descriptions of the outdoor and indoor scenes; the way in which what someone says shows the reader what kind of person she is. In fact, the very first words of the book set up the character, Kitty for us:

"Ah, don't begin to fuss!' wailed Kitty; "if a woman began to worry in these days because her husband hadn't written to her for a fortnight! Besides, if he'd been anywhere interesting, anywhere the fighting was really hot, he'd have found some way of telling me instead of just leaving it as 'Somewhere in France.' He'll be all right."

Well, not the sort of person I'd want waiting for my return!

The narrator is the other woman living in the house, Captain Baldry's cousin, Jenny. It is quite obvious that she is the one who truly loves the man.

I wanted to snatch my cousin Christopher from the wars and seal him in this green pleasantness his wife and I now looked upon.

This 'green pleasantness' is just the sort of British country home one dreams of. Beautiful grounds and beautiful house which Chris himself (his hired workers) had rebuilt after his marriage to Kitty, and before the war. And this rebuilding features strongly in the book. For Christopher comes home from the war with no memory of the past fifteen years. He no longer recognizes his 'new' home. He has no memory of his marriage or of the death of his young son.

The way the two women hear the news of his problem is puzzling and upsetting. A perfect stranger, Mrs. William Grey, arrives from 'the red suburban stain which fouls the fields three miles nearer London than Harrow-Weald.' She tells them that Christopher is 'hurt.' The women at first think she is lying. How would she know of the situation when they haven't heard from the War Office? It turns out that she received a telegram from a hospitalized Christopher, addressed to her maiden name and sent to her old home. She says that they knew one another fifteen years ago, and she has neither seen nor heard from him since.

And there our story really begins. We learn about his fifteen-year old memories. We meet a doctor who has a plan to 'cure' him, and we are presented with the ethics of the whole situation. I was completely involved in the book. I was fascinated by each of the people, and how they reacted to the ordeal they had to cope with. The use of 'modern' psychology is particularly interesting. The Return of the Soldier is beautifully written and gives the reader a lot to think about.
Posted by Nan