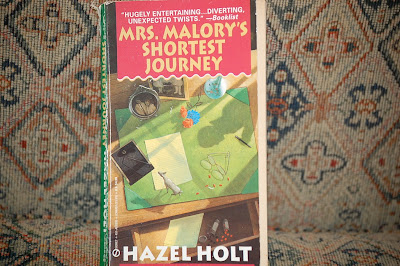 Ah, how nice to be back in the company of Sheila Malory. She is such a homey, comfortable person, one you might long for as a friend or neighbor. She truly cares about her friends, and those who are in need of company. In this book, she is spending time with two particular women, both friends of her late mother, who are in a nursing home. Hazel Holt writes of a situation we all face sooner or later.

Mrs. Jankiewicz and Mrs. Rossiter were almost the last of Mother's friends - so many others had died - and when they were gone yet more links with my past would be broken; one day soon there would be no one who still thought of me as a child.

A character who often appears in these books is a friend of Sheila's called Rosemary. She has a harridan of a mother who is demanding, puts unjustified guilt on her daughter, and is just plain selfish. In Mrs. Malory's Shortest Journey, we find that Mrs. Rossiter's children are the equal to Rosemary's mother. Sheila reflects on this:

I stood for a moment pondering on the unfairness of life that gave Rosemary a mother like Mrs. Dudley and Thelma one like Mrs. Rossiter.

The mystery in the story is that Mrs. Rossiter disappears from the nursing home. There is a lot of speculation because of an odd will which involves her dying sister and her. The solution is very satisfying, and was for me quite unexpected.

I don't read this series for the mystery element. I read it because I want to spend time with kind, generous Sheila and her animals, in her lovely town. I'm buying all the books in the hope of reading them over and over. They do me good, just as does a visit with a friend. If you haven't made her acquaintance, I'd like to introduce you. The books are listed in order here with alternate titles.
Posted by Nan