It Ain't All About the Cookin' by Paula Deen 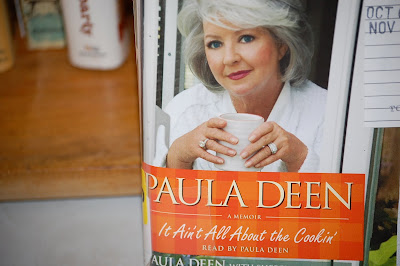 51. It Ain't All About the Cookin'
by Paula Deen and Sherry Suib Cohen
nonfiction, 2007
library audio cd
abridged audio read by the author
finished, 10/29/09

I've only seen Paula Deen's cooking show maybe three times, but I found her so delightful that when I saw this audiobook at the library, I thought I'd like to read it. The bonus is that she is the narrator. I had read somewhere that she went through a long period of agoraphobia when she didn't like to leave her house. This is only one facet of her life which she has decided to share. She wondered about doing such a book because she didn't want to disappoint her fans who love her.

This excerpt (scroll down the page a bit) from the beginning of the book will tell you more than I can ever write in a book report. I didn't find out until after I listened that it was abridged, but it doesn't seem to matter. Her story moved along just fine. I really enjoyed getting to know Paula, and by the end of the book she felt like a new friend.
Posted by Nan