The Case of the Missing Servant by Tarquin Hall 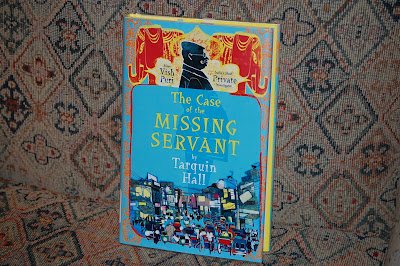 For mystery lovers, it is so exciting to come upon a new series. Well, at least I hope this continues as a series, for I've not read anything like it before, and was completely enthralled by it. I have read some about India, but it is India in past days, not India today. Hall's Delhi, where the author lives (as well as in London) is absolutely a character in the book. It would not be the same story if it were set somewhere else.

In his childhood, Delhi had been slow moving and provincial. But in the past ten years, Puri had watched the city race off in all directions, spreading east and south, with more roads, cars, malls and apartment blocks springing up each day. The dizzying prosperity attracted millions [!!] of uneducated and unskilled villagers into the capital from impoverished states across north India. With the population explosion - now 16 million and rising - came a dramatic increase in crime. ... For Puri, this meant more work. Most Private Investigators Ltd. had never been busier.

Through the eyes of Vish Puri private investigator, the reader sees all the problems which have come from such an increase in population. In the old days of arranged marriages, the families knew one another. In these days of internet connections, and meeting people in different ways, there is concern on the part of parents about just who their son or daughter is engaged to. Puri is frequently asked to do background checks on the parties involved.

The book describes the horrors of the Indian court system, the corruption of the police, the terrible driving, and the social system. There is a lot that is awful, but this character, Vish Puri, is a wonderful one. He is naturally optimistic, though his cheerfulness sometimes flags in the face of the troubles. All this makes for a most interesting, intriguing, fascinating book. I was riveted. I could feel the air and see the city. I so enjoyed getting to know Puri and his family. His mother is a real character with her own sleuthing abilities and connections in her circle of friends. And then there is the food. There is a lot of food mentioned, from aloo parantha, 'a flat Indian wheat bread stuffed with potato and spice mixture, pan-fried and served with yogurt and pickle,' to khichri, 'a cupful of rice cooked with yellow lentils and spiced with cumin, salt and coriander. Generally eaten when one is sick or in need of comfort food.' There is a tremendous glossary which defines all the Indian terms. By the end of the book, I found I had learned some without having to look them up at each mention.

Early on in the book, our private investigator is almost killed. He is way too busy trying to solve other cases, so his mother takes this one on, unbeknownst to him. Though his chief investigation is of the disappearance of a young girl from her employment in a rich family, we learn of other cases and stories as Vish Puri goes about his business. He is really quite a humorous character, very full of himself. He keeps all his detailed records and plans to leave them to the National Archive 'because he was certain future generations of detectives would want to study his methods and achievements.'

This is a very different entry into the mystery genre. The locale and the detective are completely new and unique; much as was Botswana and Mma Ramotswe were when Alexander McCall Smith introduced them to the world in the first book of The No. 1 Ladies' Detective Agency series. May Tarquin Hall continue bringing us more news of Vish Puri and his work. This character is a true original in the fiction world, and I cannot wait to read more about him and his home country.
Posted by Nan