The Dogs of Riga by Henning Mankell 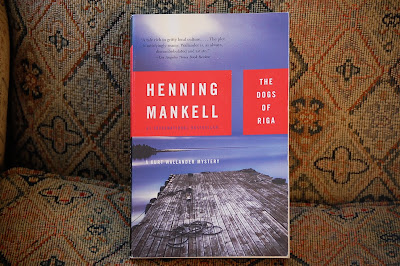 54. The Dogs of Riga - second in the Wallander series
by Henning Mankell
mystery, 1992
translated by Laurie Thompson
finished, 11/20/09

Three little things that make me love the books by Henning Mankell:

I love the inclusion of weather. It is a character. It is important. The first words of The Dogs of Riga are:

I also love a book that says:

It was less than a month since his friend and colleague had died of cancer.

And I love a book that tells you the date when the story begins: February 12, 1991. Let's see, my kids were eight and five on that date. I was thirteen days from turning forty-three years old.

Kurt Wallander is not one of those arrogant, know-it-all policemen. He is not perfect. He makes mistakes and feels remorse about them. In this story, there's an inflatable life-raft that two murdered men were found in. It ends up being stolen from the basement of the police station.

He realized the fatal error he'd made. Nobody had let the air out of the rubber boat, nobody had looked inside. It had not occurred to him to do so. ...Wallander felt embarrassed. How could he have failed to open the raft up? He would have thought of it sooner or later, of course, but he ought to have done it straight away.

And a little further into the story, when he has gone to Latvia:

I'd forgotten that I'm in an alien world.

A measure of real talent in a series writer for me is when the second and further books do not follow a prescribed formula. The Dogs of Riga couldn't be more different from Faceless Killers. Our hero is in a different place, with completely different concerns. We learn more about who he is and his feelings about his home country, Sweden. I am so pleased with Mankell's writing. I feared that I might not enjoy this book as much as the first because the translator is different, but it was just as good, and again, did not feel like a translation.

This book reminds me (as if I needed a reminder) how very little I know about certain parts of the world, like Scandanavia, Eastern Europe, the former Soviet Union. What I know, I learned from Michael Palin in his journey, New Europe. If you are interested, please do visit his website. You may now read this, and all his other books online. There are also wonderful new paperbacks of each journey. And the dvds are at Netflix.

The Dogs of Riga begins two years after the Berlin Wall came down, and because it was actually written in that time, there is an immediacy to the story that is makes it very exciting.

The life-raft I mentioned is the catalyst for bringing Kurt Wallander to Latvia. There he finds a world in tumult. Just as in all the Cold War spy stories the setting is dismal, the people duplicitous, the gap between rich and poor huge. He ponders the conditions there, and thinks a lot about his own country.

This is Sweden, he'd thought. Everything is so bright and cheerful on the surface, our airports are built so that no dust or shadows could ever intrude. Everything is visible, nothing is any different from what it seems to be. Our national aspiration, our religion, is that security is written into the Swedish constitution, which informs the whole world that starving to death is a crime. But we don't talk to strangers unless we have to, because anything unfamiliar can cause us harm, dirty our floors and dim our neon lights. We never built an empire and so we've never had to watch one collapse, but we persuaded ourselves that we'd created the best of all possible worlds, and that even if small, we were the privileged keepers of paradise.

Whew! I look forward to seeing if, and/or how, this opinion changes over the course of the series.

The 'dogs'in the title are symbolic; they are a metaphor for the spies who are everywhere. Who may he trust? Who is telling the truth? What is the truth?

I so enjoyed this book. I liked learning about this time and place in history. I am fascinated by the character of Kurt Wallander. I love this series.
Addendum: you may read about present-day Riga here.
Posted by Nan