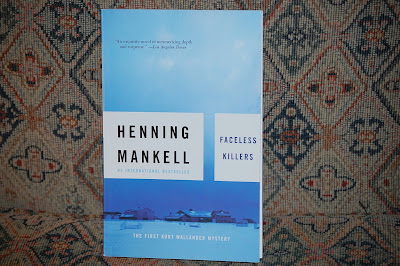 After watching Wallander on PBS, I just had to begin reading the series by Henning Mankell. I was a bit nervous, since oftentimes translations simply do not work, but this one, by Steven T. Murray was so marvelous that I never even thought about it being a translation. I am so glad I saw the television production first because I could picture Kenneth Branagh as Wallander. Just as John Thaw was a perfect Morse, so Branagh is a perfect Wallander. The programs are available on dvd from Netflix. I hope there are more coming.

This first book in the series was published in 1991. Kurt Wallander is a criminal detective in his early forties, the same age as Mankell was at that time, and incidently, as I was, since I was born in the same year as the author. Chapter one begins with the crime which has taken place, and in the next chapter we meet Mr. Wallander. His wife has recently left him; he is estranged from his nineteen year old daughter who comes and goes without much communication; he is living on junk food and gaining weight; and his father, with whom he has a difficult relationship, seems to be losing his mental faculties. His situation mirrors the landscape, the dull, dark time of year (the book begins on January 7, 1990), and the serious crime which has been committed. Out in the countryside an old farmer has been murdered and his wife left to die, which she does before long. The murders are particularly brutal which leads Wallander to puzzle over who would do such a thing. There are some odd clues. First, there is a noose around the woman's neck with an unusual knot. Second, the only word the woman utters before she dies is 'foreign.' Third, the horse in the barn did not whinny. This last clue is in fact what drew a neighbor to go over to the house and find the bodies.

In the course of solving the crime, we get a good look at Swedish society at that time. There is mention that robberies of the elderly in rural areas is not that uncommon. There is growing dismay about the immigration laws in the country. There are anti-refugee movements. Because of the woman's last word, Wallander cannot rule out that a 'foreigner' may have committed the murders, but he is loath to let these thoughts out to the press, and hence fuel anti-foreign sentiments.

This is a complex story, and utterly fascinating. We go right along with Wallander, following the twists and turns of the case. He is one of the most interesting characters I've yet met in detective fiction, and I am so thrilled that there are many more books ahead to read. I have four of them on my shelf, and will buy the rest if these four are anywhere near as good as this excellent first book.
Posted by Nan