Death of a Maid by M.C. Beaton 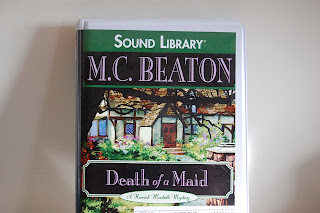 I haven't visited with my fictional friend, Hamish Macbeth in a few years. In the spring of 1999, I read the first fourteen (skipping the third because it didn't sound appealing) of these mysteries set in Scotland. I read one right after another, and though they aren't brilliant literary works, they do offer a cozy familiarity that gives great pleasure to this reader. I read one other entry in 2004, but there are still quite a few I haven't read. Recently I came upon an audio version of No. 23 in the series at my local library, and I thought it would be fun to check in with Hamish and see what he was up to.

I do not have a 'maid' or a 'cleaning lady' but I know a few women who do. I've always wondered about the idea of having a perfect stranger (in most cases - especially if you don't live in a small area) come into one's home when no one is there. How could that person resist reading a note left on the fridge from a wife to her husband. 'Don't bother coming home tonight; we are done!' And what about the opposite - a little love note left on a pillow by an adoring spouse? What about the bills that are right out on the desk that must be dusted? Oh, the possibilities for gossip, or worse, blackmail. I know, I know, I live too much in mystery stories and detective shows on television, but honestly how many people wouldn't pry, either on purpose or inadvertantly, as they go about their cleaning?

And this is the premise of Death of a Maid. The maid works for a number of people, and 'collects' their secrets. When she is found dead, there are any number of suspects. This was a very good mystery, and such a nice surprise to see that after twenty-two books in a series, the twenty-third is really quite interesting. Hamish is the local constable of Lochdubh, and is still a happy fellow, living in his police station. He likes working in his small village, and the dread of his life is that he will be 'promoted' to another place. I'll probably seek out some of the others I've missed in the intervening years.
Posted by Nan