"The Right to Dry" - my kind of politics

I read something today in The Vermont Country Store catalogue that I wanted to share with you, for it expresses my kind of politics. Usually being political is understood to mean - voting, canvassing for a particular candidate, getting involved in the political process. All that is true, but there is another way to be political, and that is in one's day to day life. I view each decision I make, no matter how small, to be a demonstration of my "politics."

That said, here are the words of the owners of The Vermont Country Store, The Orton Family. It is titled: Do You Have "The Right to Dry" Where You Live?

We've been promoting a new kind of civil disobedience to save energy and help the planet: Set up a clothesline and hang your wash out even if you live in a neighborhood where doing such is prohibited. Is it not the height of snobbery to declare hanging clothes out to dry illegal?

Someone years ago in some rich, exclusive development decided that clotheslines with their hanging sheets - and, oh-my-gosh, underwear! - were déclassé amd declared them illegal. That was the turning point in America, when we started moving from the small-town feel of inclusion to the gated-community exclusion and buying of status. Such ordinances and association rules fly in the face of efficient energy use and it's time to get rid of them.

It's a beautiful thing to see clothes drying in the sun and wind, letting nature do the job for free, without any energy being used or lint accumulating. Do my tighty-whities hanging on the line really shock and embarrass anyone? If I have a clothesline, do you look down on me? Well, certainly not in Vermont!

This past year in Vermont we attempted to pass a "right to dry" law but it failed. You can be sure we'll bring it back this coming year and hope other states do the same.

We are not trying to shame anyone into getting rid of their dryer but we are trying to gain the right for anyone to put up a clothesline and dry their laundry the old-fashioned way. It's not only frugal but a common sense way to reduce out impact on the planet. 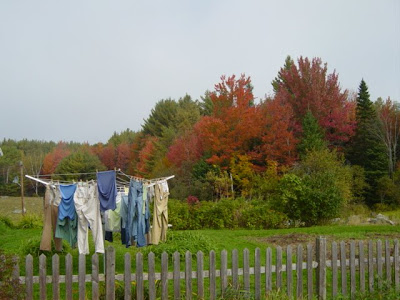 (If you type 'clotheslines' into the search bar, you'll find many words and pictures from previous posts on drying clothes outdoors).
Posted by Nan